Johann van Graan has hit back strongly at suggestions he is not committed to Munster.

The head coach is set to leave the province at the end of the season for English Premiership side Bath.

However, there have been calls for the South African to vacate his role before the end of the season, with Munster's legendary former scrum-half Peter Stringer suggesting that Van Graan has become distracted by his future plans.

"I'm just not getting any emotion from Johann, a feeling that he wants to be here, and I think he doesn’t really want to be here, he changed his mind about his contract," Stringer said on RTÉ2's United Rugby Championship coverage on Saturday night.

"For me, it’s about letting someone put up their hand and say, 'I want to take control of this place, I want to show my emotion and what it means to me as a person to run this organisation’ and I’m just not getting that from him."

However, the Munster coach has passionately denied that he is no longer committed to the province.

Speaking yesterday ahead of Friday night's Heineken Champions Cup pool game away to Castres, Van Graan says he is fully focused on Munster for the remainder of the season.

"I absolutely want to be here," he said, when asked about Stringer's comments.

"I've committed until the 30th of June with this club. I’ve communicated that to all the right channels as I’ve stated in the middle of December.

"I’ve been open with this group. I will continue to do so and I’ll continue to put every bit I have into this club until I leave here on the 30th of June."

"The important thing from my side is I've got a job to do and that's being the coach of this group of players and this team. I'm very privileged and proud to be that and will continue to do so.

"It's very important to note that the fans of Munster have been incredibly good to my family and I.

"I think it's important to note that we as a club are united. The people that work for Munster Rugby, we are all in this together and one of our core values are community and I believe that you should always see the best in people.

"I understand that some people are not happy with some of our performances and we as a group have taken responsibility, not because they think that way but because of our own standards." 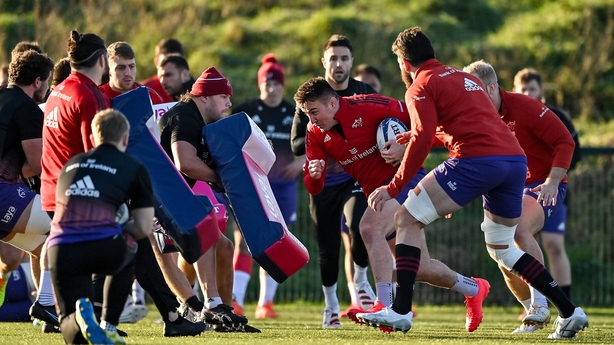 Saturday's win against Ulster has eased some of the pressure on Van Graan, with Munster's second half performance seeing them come from seven points down to win 18-13, having played more than an hour with 14 men following Simon Zebo's red card.

Van Graan believes that the tries for Mike Haley and Jack O'Donoghue show Munster are finding more fluidity to their game, after a disjointed couple of months following their abandoned tour of South Africa.

"It's well-documented that some of our performances over the last few weeks haven't been good enough. I would say that yes, we can improve on performances week-in and week-out.

"Last week was probably the first week that we had most of our players back as a group training together and hopefully we can get some momentum.

"Look at someone like Jack O'Donoghue's off the ball work for that try, he carried on the left, there was one more phase and he made that line break. To finish it off was very pleasing.

"We need more of that. Like I said, Friday night (against Castres) again is a very different battle to what the opposition is going to give you.

"They have got a very big pack of forwards. They will challenge us at scrum and maul time. They will kick long back into our own 22 and invite us to play out of there.

"Yes, we have got some phenomenal counter-attackers and we will use them at the right time. Hopefully we can deliver a performance that makes sure we get a good result on Friday evening," he added.

The head coach also confirmed that both Conor Murray and Keith Earls are available for selection having been given personal time for the first two games of January.