Munster have named five debutants in their starting team for Sunday's Heineken Champions Cup opener against Wasps in Coventry (3.15pm).

Seven of the eight replacements named by Johann van Graan will also make their debuts if sprung from the bench.

None of those players named in the matchday 23 were involved in the abandoned tour of South Africa, despite hints from Van Graan that some were being considered.

While the Munster head coach has been able to name a loaded backline, which sees Chris Farrell return from injury for his first game of the season, they've given a debut to Patrick Campbell at full-back, with the former Cork minor footballer having only joined the academy last month.

However, four of the starting pack will be making their debuts, with 19-year-old Limerick man Daniel Okeke starting at number eight.

Waterford's Eoin O'Connor will partner Beirne in the second row for his first senior appearance, while in the front row there are debuts for Cork pair Scott Buckley and James French, the latter of whom is a member of the senior squad.

The two-time champions will be seriously tested later in the game, with seven of their eight replacements in line to make their debuts for the province.

Roman Salanoa is the only one of those who has first-team experience. Summer addition Declan Moore and Academy quartet Mark Donnelly, Ethan Coughlan, Tony Butler and Jonathan Wren are all included.

Meanwhile, Duane Vermeulen will make his Ulster debut in the Champions Cup opener away to ASM Clermont Auvergne tomorrow (5.30pm).

The South African World Cup winner arrived in Belfast last week and tested positive for Covid-19 but has now cleared all the protocols and gets his Ulster career under way in France.

The Springboks star is among five changes to the team that faced Ospreys last weekend.

The front row sees changes at loosehead and hooker, with Andrew Warwick and Rob Herring coming in to start alongside tighthead prop Tom O'Toole.

Alan O’Connor will skipper the Ulster side, with Kieran Treadwell joining him in the second row.

Marcus Rea gets the nod at blindside flanker, with Nick Timoney retained at openside and Vermeulen packing down in the number 8 jersey.

Behind the pack, Ireland international James Hume is the sole change to the Ulster backline.

John Cooney and Billy Burns retain their half-back partnership, with outside centre Hume coming in to partner Stuart McCloskey in midfield.

The Ulster coaching group has opted for a 6-2 split on the bench, with back-row Sean Reidy in line to make his 150th appearance if called upon.

Former Munster out-half JJ Hanrahan will start for the hosts.

Elsewhere, Connacht have made several changes for Sunday's visit of Stade Francais to the Sportsground (1pm) in Pool B.

Ultan Dillane is absent for Andy Friend's side, so Niall Murray returns to the second row, where he is partnered by Oisin Dowling who was a late withdrawal from last week's team to face Leinster at the RDS.

Cian Prendergast made his return from injury off the bench a week ago, and comes back into the starting team at blindside flanker as Eoghan Masterson drops to the bench.

In the pack, Friend continues to rotate his hookers as Shane Delahunt swaps with Dave Heffernan, to pack down in between Matthew Burke and Finlay Bealham.

In the backline, Mack Hansen has been pulled from the team on Friday evening, having initially been picked to start on the wing. John Porch takes his place on the left wing, while Caolin Blade and Shayne Bolton also come into the side.

"Sunday is the start of a really exciting opportunity for us to make an impact in the Champions Cup," said head coach Andy Friend.

"Knockout rugby in the competition is the aim so a win this weekend is vital if we want to get there, albeit against a very strong Stade Francais team.

"There's been some special occasions at our home in this competition so with a strong Sportsground crowd behind us it's set up to be a great occasion".

Meanwhile, Leinster welcome back Jamison Gibson-Park but have been hit by three positive Covid-19 cases. 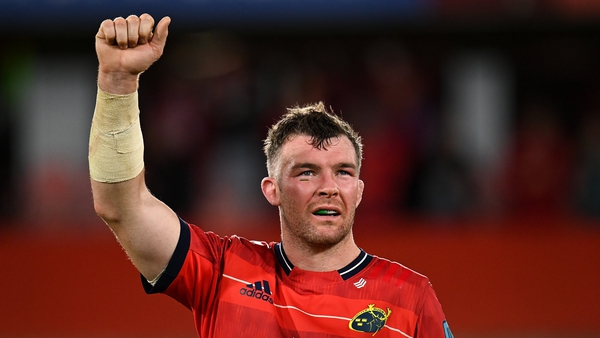