There has been a worrying spike in the numbers in recent days.

An abundance of caution is being urged as cohorts of the media and the rugby public have been hit by yet another wave of optimism ahead of this afternoon's game.

The final whistle, when it comes just after 5pm today, is being heralded as a 'game-changer’, one way or the other.

Defeat for Ireland would vaccinate against the optimism for a while at least, although its longer-term efficacy has been known to wane.

Any sort of a victory for the hosts would lead to a tidal wave of the hope variant that even the most optimistic models predict could last until a World Cup quarter-final in two years’ time.

Andy Farrell smiled when it was put to him that Johnny Sexton said today's game is all about winning.

"He likes winning. Having said that, we just want to put our game out there.

"That’s what we should get excited about it. Let’s see where we’re at. If you get too distracted just about the win, then you’re not going to perform."

Two measly victories in 116 years of trying means that getting more points on the board than the All Blacks today is not to be sniffed at, however it may come about.

But having introduced the concept of "daring to dream" about a World Cup breakthrough two weeks ago, the onus is now on Farrell to build a stable foundation for that goal.

Last week’s 60-5 win over Japan was Ireland’s sixth victory in a row and, allied to the impressive triumph over England at the tail end of the Six Nations, has been a major seed for that cursed optimism.

"What we saw [against Japan] was a very motivated team who had a great intention to play," New Zealand head coach Ian Foster, whose side have won 12 of 13 games this year, told RTÉ Sport this week.

"There’s no denying they look a little more comfortable with the ball and have the intention to move it a bit more.

"We haven’t put too much emphasis on last week’s game but when you combine that with the growth we saw in the Six Nations it shows they’re a team well prepared." 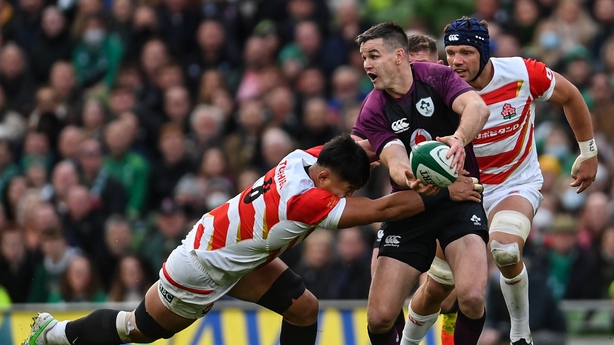 Neither Farrell, nor Sexton, rightfully, would commit to any particular playing style for today's game, forecast to be played out in under a cloudy sky in 13C, but setting out with the intent that was on display last week would say so much about this team and its identity post-Schmidt.

When you consider that New Zealand have scored 13 tries (from a record 96) this year off kick returns, almost double the next best side, England (7), then the ceding of possession to the likes of Jordie Barrett, Will Jordan, Sevu Reece and Beauden Barrett via skyscraping box-kicking seems folly.

However, that’s not to be confused with losing the ball when trying an offload in contact or a risqué pass under pressure. Those plays come with big rewards.

These things were strictly forbidden under the previous coach and players, like against Japan, must feel they have the freedom to lose the ball. Odds are that if they believe, then it will come off more than not. The skills are clearly there.

Will Ireland be brave enough to trust their attacking game against New Zealand?

The camp was affected by a Covid-19 incident yesterday but a second round of testing provided an all-clear and Ireland make just one amendment with the side that hammered Japan,

Iain Henderson - who along with replacement hooker Rob Herring did not take part in yesterday's captain's run - fits in in the second row ahead of Tadhg Beirne, Farrell preferring the Ulster horse for the course.

Reece, the one-time Connacht target, retains his place, while 14 new men come in to the team that beat Italy 47-9 in less than convincing style last week.

Still, that win was number 38 from their last 40 games in Europe, the 2018 defeat in Dublin and a 2012 loss to England the exceptions.

But this game represents their stiffest test of the tour. They put over 100 points on the board in a joke match against the USA and hammered a second-string Welsh outfit, in a game played outside the official international window.

The fact that they rested so many frontliners in Rome means this game has been on their radar for a while.

While, of course, these games are generally decided by who wins the war up front, the stand-off at stand-off (or first five-eighth if that’s your thing) should be a joy to behold.

Sexton and Beauden Barrett, both recently capped 100 times and both former world players of the year, are in super form.

There's the extra spice of three New Zealanders in the Ireland line-up although Foster was not inclined to throw empty plaudits the way of Bundee Aki, James Lowe or Jamison Gibson-Park when asked if they, in another world, could have been wearing black today.

"I guess they are Kiwis in one sense, but they're Irish now," he said pointedly. Maybe that will put a little extra spice in the bag for the trio.

Five years ago in Chicago, Ireland revealed that the All Blacks were human after all. Two years later they proved that once you realised that then it became a contest of equals.

"The team has been great ever since I came back from home having been away for family reasons obviously," said captain Sam Whitelock yesterday when asked if fatigue would play a part.

"Aaron Smith comes in with energy like we had five weeks ago. We are in a good spot and just want to get out there and play.

"Everyone wants to get stuck in."

Sure, but following on from a brutal Rugby Championship in Australia and the many miles on the clock they've accrued to get to here, they have to be tired.

"I don't think you would ever say you are really confident about beating the All Blacks," said Sexton just after the Japan game.

Follow Ireland v New Zealand (3.15pm) via our liveblog on RTÉ.ie/sport and the RTÉ News app, watch live on RTÉ2 and the RTÉ Player or listen to national radio commentary on RTÉ Radio 1's Saturday Sport. 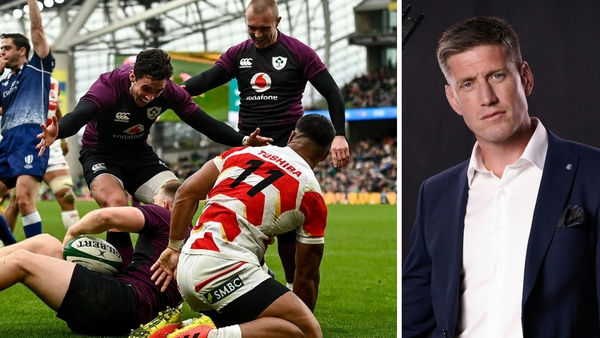