As Andy Farrell's Ireland move further down the World Cup line, so too does the coaching team around him.

When Joe Schmidt's former defence coach took his seat in the big chair in 2020, it wasn't a case of just guiding the cart along the same track.

Assistant Greg Feek departed for a new role in Japan, having turned Ireland's pack into one of the most consistent and efficient scrums in the world.

John Fogarty arrived from Leinster, and while Ireland's set-piece looked formidable again during the Six Nations, it took him time to put his stamp on the way Ireland would pack down for each scrum. The details are minor - the placement of a foot, the position of a bind - but getting those collective details to marry together took time.

Mike Catt joined from Italy, re-united with Farrell from their days working together under Stuart Lancaster with England.

Simon Easterby took on greater responsibility, adding a defence brief onto the forwards role he had held under Schmidt, but as Ireland's lineout worries increased during 2020, Paul O'Connell arrived on the ticket with Easterby working exclusively on defence.

The final game of the 2021 Six Nations - a 32-18 win against England - was the first time all those pieces fitted together.

O'Connell's forwards were disruptive, halting England's maul and their ability to gain forward momentum off the lineout.

Easterby's defence was led by Robbie Henshaw with relentless speed off the line, shutting off the midfield and giving them no space, particularly in the first half.

And Fogarty's scrum dominated England, to the extent that Mako Vunipola and Luke Cowan-Dickie were whipped off at half time.

It was - by some distance - the best Ireland performance in Farrell's short tenure as head coach.

It's been marked down in camp as the benchmark, the standard to which Farrell's Ireland have to consistently match, rather than produce at the end of an otherwise forgettable Six Nations.

"It has been (mentioned), yeah," says second row James Ryan.

"We've referenced that English game, in fairness the Japanese game (in July) was good too."

In the next 12 months, we're likely to find out a lot about where Farrell's Ireland are going. Next month sees three Tests against Tier One nations, as Japan, New Zealand and Argentina visit Dublin. The 2022 Six Nations is a Paris and Twickenham year, while their summer schedule sees a three-Test series away to the All Blacks, their first such tour to New Zealand since 2012.

"We just want to keep pushing on, the challenge of international rugby is that some of these windows you come in and don't have a lot of time to prepare, it's like a week or two.

"It's the same in the summer when we tour New Zealand, it's very quick turnarounds."

O'Connell's appointment as forwards coach in January seems to have sparked the pack into life. The lineout had become a genuine concern throughout the course of 2020, and it capitulated at Twickenham in last year's Autumn Nations Cup.

"To be honest he is very like Joe in the way he sees the breakdown, the way he coaches it."

Ball retention has steadied, while during the Six Nations Ireland thrived on both defensive lineouts and at the breakdown; Tadhg Beirne (10), Iain Henderson (6) and CJ Stander (5) were respectively first, second and joint-third in the list of turnovers won.

"I think one area of our game is our ruck that has really come on in the last six to nine months and I think Paul (O'Connell), since he has come in has done a real good job in that," Ryan continued.

"To be honest he is very like Joe (Schmidt) in the way he sees the breakdown, the way he coaches it. He was obviously a big influence on Paul like he was on all of us. I think that's an area of our game that was very strong in the Six Nations. It has to be because it’s the core of our attack.

"The set piece as well, we have grown in that area. Fogs (John Fogarty) has done a good job there in the scrum and Paul since he’s come in, he’s also had a big influence in our set piece, our drive in particular.

"I think it was a strength of ours in the summer. In terms of all round play we are trying to be very good in terms of our unstructured attack, our ability to put phases together cohesively on turnover or when the ball goes behind us. That unstructured attack is probably an area for us that has come on in the last 12 months and it’s an area we are keep trying to push on," Ryan added.

Everything Ireland do over the next two years is ultimately going to be viewed through the prism of the next World Cup, at least from the outside.

The players and management are referencing it though, Johnny Sexton saying it's "on the horizon" for the group, while Farrell yesterday challenged his players to embrace the pressure of it.

"It's exciting to be thinking about it already, but it is the pinnacle of the sport we play, it's the world stage."

Likewise, Ryan says the carrot of France 2023 is "exciting", but insists they won't allow it to distract them from the here and now.

"There's a bit to be said for that too, focusing on what's in front of your face. That was a real strength for us as well.

"This time around it is a little bit different. We have the World Cup there in the back of our mind, and we've got five blocks to get there between now and 2023.

"It's exciting to be thinking about it already, but it is the pinnacle of the sport we play, it's the world stage. Ultimately it's where we get judged, but in saying that we have five blocks between now and then to grow and keep improving, and this month is kind of the first of those.

"With the All Blacks coming to town, it'll be them alongside the Boks who are the benchmark at the moment in the sport. It'll be good to see where we sit, and even before that with Japan it will be a real test for us as well."

The November campaign starts a week from today, as Japan come to Dublin for the second time in four months.

Jamie Joseph's side may not captivate the casual fan the same way that the southern hemisphere's big three do, but their all-action, relentless style of play does have the potential to cause huge problems for a group of Irish players who may be a little undercooked, with just a few competitive games in their legs this season.

Ryan's message is clear for anyone thinking they are, or should be a walkover.

"Probably watch the 2019 World Cup maybe?" he asks, describing the World Cup defeat to the Brave Blossoms as "one of the toughest" games he's ever played.

"Japan's point of difference is the brand of rugby they play. It's very easy to spot, how rapid they are, the tempo they play at, that's kind of their strength, not that New Zealand don't play in that way.

"Particularly defensively it's a massive challenge for us. It was in the summer and it was in 2019.

"They work at such space and it's a big challenge for us to see how quick we can reset defensively, what's our appetite and what's our intent like, and then keep building for the rest of the month.

"They're probably not the biggest men in comparison to some of the teams. They kind of try to negate that through the quickness of their play and that kind of brand suits them because they are a bit smaller. So we'll see how we get on." 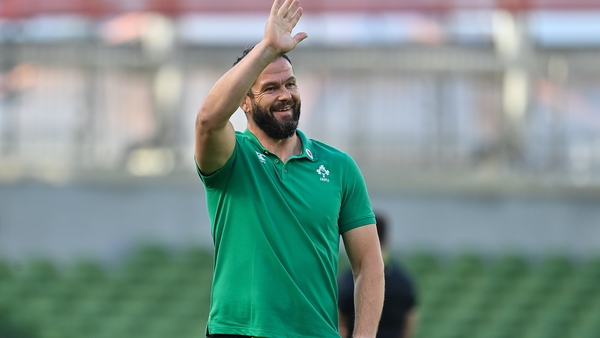