A vastly improved Ireland finished their Guinness Six Nations campaign on a high with a comprehensive win over England in Dublin.

Facing the prospect of a fifth successive loss to Eddie Jones' side, Ireland took the game to the visitors and thoroughly outplayed the defending champions.

Early losses in the tournament meant that neither side had any silverware to play for but, for the first time in five games, Ireland produced the 80-minute performance that coach Andy Farrell had pined for.

Keith Earls and Jack Conan scored tries in the first half and the superb Johnny Sexton kicked 22 points off the tee.

The result left Ireland in second place of the table ahead of Wales’ visit to Paris this evening and the outstanding France-Scotland game, which will be played on Friday night.

The only negative was a red card for Bundee Aki, with the centre sent off for the second time in his Ireland career for a high tackle on Billy Vunipola in the 64th minute.

Mindful that fast starts by England in recent games had left Ireland playing catch-up from early on, it was a victory in itself that the visitors were restricted to just an eighth-minute Owen Farrell penalty, after an infringement at the lineout, to show for their dominance.

It looked ominous for Ireland when Maro Itjoe was held up over the line following a lineout maul but Ireland won a free kick from the subsequent scrum to edge another small battle. 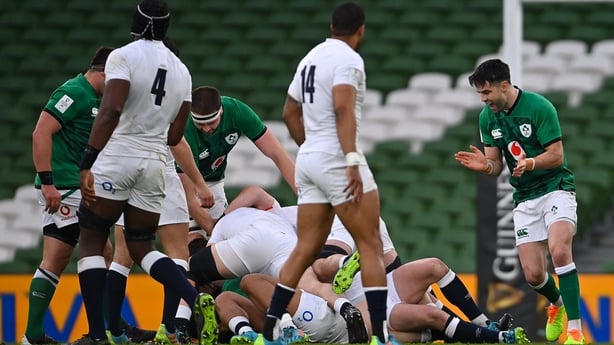 Ireland worked their way upfield and earned a penalty in front of the posts after man of the match Robbie Henshaw chased Sexton's Garryowen and England, who withdrew full-back Max Malins before kick-off, sealed off the ruck.

The hosts lost Dave Kilcoyne to a head injury in the 20th minute but soon struck for their first try of the afternoon.

Mike Catt’s attack had come in for much criticism over the course of the tournament, but this was a strike play out of the top drawer. 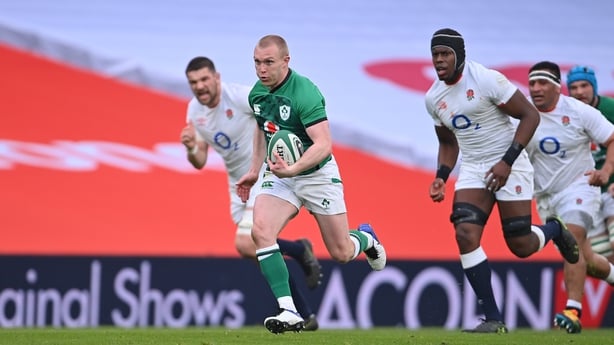 Rob Herring threw over the top where Conan outjumped Tom Curry and tapped down for Earls, who had come in off his wing.

The Munster man made for the posts but then sidestepped back outside Jonny May before winning the race to the line for his 34th Ireland try, which Sexton converted.

Farrell and Sexton swapped penalties just before the half-hour mark; Ireland’s won via a brilliant intervention by the outstanding Tadhg Beirne. 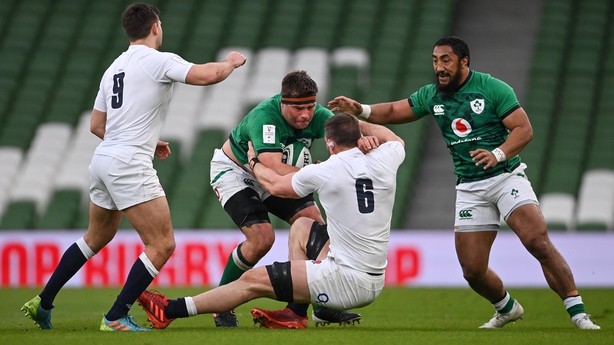 Henshaw was lording it in midfield, where he faced late replacement Ollie Lawrence, Tadhg Furlong had the upper hand in the front row, with Mako Vunipola and Luke Cowan-Dickie being replaced by Ellis Genge and Jamie George at half-time.

Andy Farrell’s men began to feed off all the little wins and were easily matching their opponents for work-rate and attitude.

The second try came after a number of phases with CJ Stander, making his last Ireland appearance, Furlong, Sexton and Keenan, the full-back out-jumping Elliot Daly to win a high ball, all involved.

The Irish captain looked hurt but was bringing the ball to the gain line time and time again and taking defenders with him. 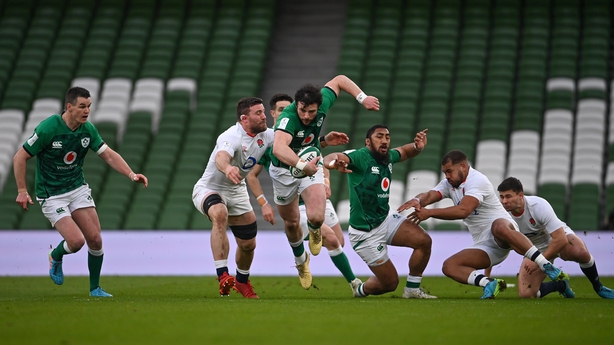 That eventually opened up a gap for Conan, who spotted the line and stretched for his seventh in 20 games, Sexton again landed the extras and Ireland had a healthy 20-6 lead to defend in the second half.

England tried to establish a foothold but indiscipline at the lineout and set-piece, as well as aimless kicking by Farrell and George Ford only encouraged the home side, who needed just 11 minutes to extend their lead.

Having weathered the mild gale that was all England could muster, Iain Henderson led the charge, breaking a tackle on the 22 and only a Cian Healy knock on denied Earls what would have been a stunning second score, touching down in the corner following a Sexton kick.

However, referee Mathieu Raynal called play back and Sexton knocked over his third penalty of the day and Ireland had a 17-point lead.

They somehow managed to blow a 14-point lead against Scotland last week so history was never going to repeat itself with the Red Rose looking a beaten docket with a full 20 minutes to go.

England opted for a scrum after a free kick, and the Irish pack pushed them off the ball and Sexton had the easiest of tasks to extend the lead to 20. 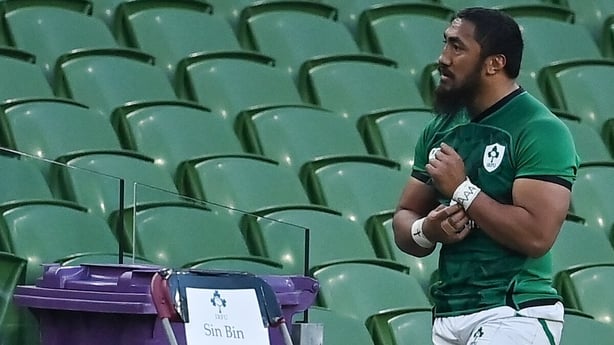 Aki then became the first Ireland player to be sent off twice in his career. The centre walked after making contact with the chin of Vunipola, who had to be removed for a HIA.

"I have a direct contact to the head with force...I cannot mitigate down the sanction," said Raynal by way of explanation.

Ireland could have no complaints and they suffered a second red card of the tournament following Peter O’Mahony’s dismissal against Wales in the first game.

England kicked the penalty to the corner and Ben Youngs found space to run in from the subsequent maul, Ford, however, was off target with the kick.

May ran in a late consolation try to add some gloss to the scoreline but it didn’t take anything away from Ireland’s completely dominant showing.

The only pity was that there wasn't a crowd there to see it. 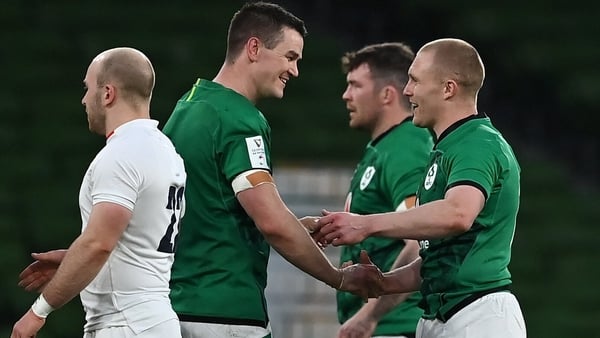 'It was the performance we wanted' - Sexton