Munster had just confirmed the news that the giant South African lock was set for another long spell on the sidelines after re-rupturing his anterior cruciate ligament.

Making just his fourth appearance for the province since joining in the summer of 2020, Snyman was injured nine minutes after coming on against the Scarlets.

The sight of the 26-year-old's head buried in the ground as the ruck dissolved hit hard, his subsequent limp off the field telling its own story.

"Oh God, don't tell me that's his knee... it's horrible to see him going off," said Donal Lenihan on RTÉ Sport's URC Live.

Head coach Johann van Graan quickly confirmed that it was a potentially significant injury after speaking to the player in the changing room.

Snyman, a World Cup winner with the Springboks, knew.

Leinster backs coach Felipe Contepomi had his fair share of injuries including significant knee issues, and has been close to the scene as back row forwards Dan Leavy and Max Deegan rehabbed following lengthy spells out with ACL injuries.

"I feel sorry for him, it's one of those things that is the bad side of sport, injuries, coming back from one injury to another similar one, it’s hard," the Argentinean, who holds a medical degree, told RTÉ Sport.

"The biggest thing is when you have a long-term injury is looking after yourself even more than when you are fit. The more you look after yourself the quicker and better you will comeback.

"Injuries can form your personality and character.

"It's a setback but I’m pretty sure he’s already looking forward, saying I’ll come stronger and better, and that’s a mentality champions have.

"You can see with Dan, he had a horrible knee injury, how hard he worked, his positivity. He wanted to get to where he was before the injury.

"It’s not about time, it’s about resilience, working, baby steps day by day to get better and better. That’s the way they approach it.

"It's admirable here with Dan and Max’s [attitude to rehab]."

Former Ireland full-back and current Ulster defence coach Jared Payne also witnessed the trials and tribulations of long-term injury with former number 8 Marcel Coetzee suffering a serious knee injury back in 2016 and then having to deal with setbacks along the way.

"Support, both physically and mentally," replied the New Zealander when asked what the most important factor in recovery is.

"I’m sure Munster are very good, they’ll get around him and support him and put in place what they need to get him back on the pitch 'cos that’s where we all want to see him.

"He’s a world class player and you want to see those guys playing rugby. Support is the big thing." 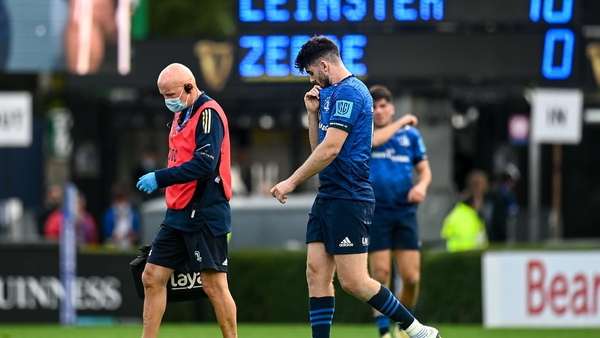 Harry Byrne to miss Leinster's visit of Scarlets, but Josh Murphy in line to return