The extent of RG Snyman's injury is unknown but Munster coach Johann van Graan said it could be "significant".

The giant South African second row was replaced ten minutes after coming on as a second-half replacement in Munster's superb 43-13 win away at Scarlets.

The 26-year-old limped off the field and looked uncomfortable as he made his way to the treatment room at Parc y Scarlets.

"I’m not going to comment on it at this stage until he’s gone for a scan. Obviously, he’s a very important squad player for us in terms of what he can bring.

"Hopefully we get some good news but it’s pretty difficult to say at this stage.

"After speaking to him in the changing room, you know, pretty worried about it."

The World Cup-winning lock signed for Munster in the summer of 2020 but suffered a serious ACL injury just minutes into his debut against Leinster in August of that year.

Last May he underwent a minor procedure on his knee after a setback in his rehabilitation.

However, he was progressing well and had made two appearances as a replacement in their opening two United Rugby Championship games, scoring a try last weekend against the DHL Stormers at Thomond Park.

"If it turns out to be serious, he’s a phenomenal man, he will get through this," added Van Graan.

"The battles that he’s gone through over the last 15 months, not a lot of human beings can do that.

"He’s got a fantastic wife and family around him and then the club, Munster, we’ll support him whether it’s one week or whatever time it is, he’ll get through this."

'A great win on the road' - Player of the match Chris Cloete and captain Jack O’Donoghue reflect on Munster's 30-point victory away to Scarlets #RTERugby #RTESport pic.twitter.com/YMkrXQV5Kz

Munster moved back to the top of the table with a bonus point win, ahead of Ulster on points difference.

Despite fielding a side with 11 changes and minus a number of frontline players, they managed to run in six tries in an impressive performance.

"We are very happy to get the win and the five points," said Van Graan.

"We came here with a specific job in mind and I thought we did that really well. Defensively, I thought we were excellent, stopping them quite a few times five yards from our line

"We only conceded one try from a broken-field chip. I thought we scored some very good broken-field tries and some excellent set-piece tries.

"I felt we deserved our lead and at half-time we spoke about consolidating and we kept going. I thought we did that really well in the second half.

"We coach these players every single day and we've been working on this project for the last five years to improve our squad and we believe we are improving every single season.

"It doesn’t matter who takes the field they’ve got a responsibility to the shirt and to come away to the Scarlets and get five points is really well done." 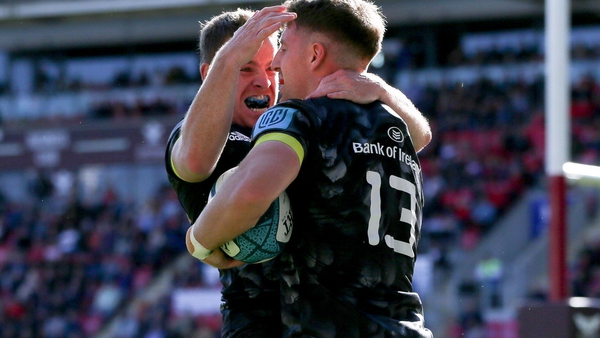