The four-in-a-row winners used 57 players, including many from the academy, when retaining their title last season.

This year sees a different format introduced with a single league, as opposed to two conferences, taking place over 18 regular-season rounds and an eight-team play-off deciding the winner.

RTÉ and TG4 will show more than 50 URC games live on free-to-air television. 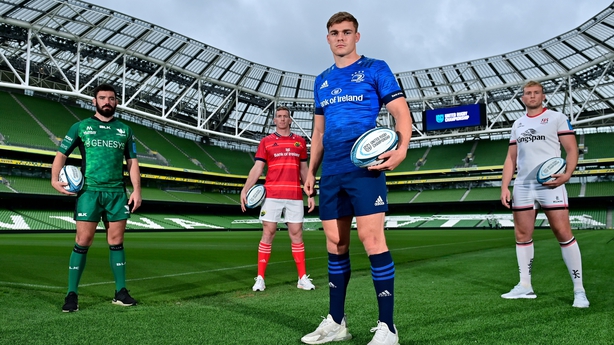 "Maybe some of the narrative that would have been outside of the playing group would say that [the quality was lacking]," the Ireland centre said.

"For us it’s always been a challenge and it’s never been easy, the strength and depth of our squad has paid dividends for Leinster.

"I can’t disagree with you, with the teams that are coming in and the quality, they way the schedule has been restructured.

"Prestige? That wouldn’t be a word that I’d use, probably, just tougher, more competitive, more challenging. That’s what myself and our playing group are facing.

"From the outside maybe [the Pro14] games might not be perceived as competitive as when you are on the inside and the preparation that goes into them.

"From what I’ve read of the new structure, that’s one of the ideas behind the new competition.

"Not only the new teams but fewer fixtures puts more pressure on them, the way they are scheduled outside of international windows.

"It’s all about making games as competitive as possible when they are being played. It’s intensifying the pressure we already feel.

"There’s a bit more clarity in the challenge we are facing."

Leinster open their defence in the Aviva on Saturday week with the Bulls, who will be without their Springboks who are playing the Rugby Championship, coming to Dublin.

Ringrose, who hopes to return from a shoulder injury within the next month, said: "We have the Bulls [in a week and half], I don’t know if anyone saw their [Currie Cup] final against the Sharks, they are pretty much as good as they are going to get if not better after two weeks’ prep.

"The Bulls have been incredible.

"Maybe sometimes the narrative around the type of rugby South African teams might play, the Bulls kind of put that to bed a little bit.

"When you look at their last five or six results, they are close to 40 points per game. They are probably a team that can do it all."