Over five years on since their last meeting, Leinster boss Leo Cullen admits that he's playing something of a guessing game ahead of the visit of Toulon to the RDS tomorrow.

Fresh from a Guinness Pro14 final victory over familiar foes Munster, Cullen’s four-time winners take on three-time champions Toulon with the prize of a Heineken Champions Cup quarter-final away to either Exeter or Lyon up for grabs.

Many of the Leinster players will have come up against some of the Toulon side at international level but there’s still an element of the unknown, says Cullen, whose opponents tomorrow boast a 4-0 head-to-head record.

"The challenge is very different," he said. "The French league is lots of big-name stars going up against each other every week, so it's a very competitive competition.

"Toulon are one of the big teams and have been one of the big-spending teams of the last 10 or 12 years, and had a lot of success off the back of that as well.

"Now they probably have a bit of a balance really between some big-name stars with some good young players coming through.

"So for our guys, it's making sure that they understand the threats that are there, but also trying to improve upon our own performance from last week.

"So we'll see how that goes, it's always a bit of a challenge.

"When you are playing against Munster in the final last week, the players know each other so well.

"There's always that extra bit of edge to those games based on, there is other things at stake, I guess, in terms of national selection and all the rest against your local rivals.

"With a week like this, when you play against Toulon, you've to do a lot more work in terms of analysis for the players to understand who they are up against, and we are trying to second-guess some of the combinations as well.

"We're only seeing this [Toulon] team [this afternoon], so trying to get a grip on some of the combinations that are there."

Toulon boss Patrice Collazo has to plan out-half Louis Carbonel and centre Ma’a Nonu, while Leinster are boosted by the return of Johnny Sexton, who along with fellow out-half Ross Byrne were injured in last Saturday's win.

"It's massive," said Cullen after they were both named in the squad.

"Between the two of them they lead the team incredibly well, on and off the pitch I think it's fair to say, so they are so important for the team.

"So yeah, great to have Johnny back starting as well. He's been good in terms of how he has led the week.

"It's just trying to get the balance over the course of the couple of weeks, people coming back in from national camp as well, off the back of the England game. 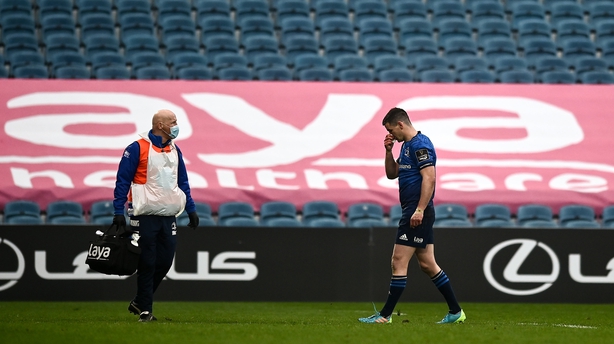 "It's just about freshening the group up. The competition in the group is good as well. Everyone is excited to get going again.

"It's a big challenge off the back of last week, short turnaround against a very, very good side as well. We need to look at the Toulon team, the quality they have and the experience as well.

"That's the great thing at this time of year, that you go from a final to a last 16 knockout game, a bit more hype than usual with only two pool games and only one for some teams."