It's been hard to flick through the papers or move the dial for the last two weeks without coming across a former international scoffing at the notion that a game against the worst team in Six Nations history was a test of character.

For that was the opinion of Ireland head coach Andy Farrell following a 48-10 win over Italy last time out.

Veni, vidi, vici, it certainly was not; Roman holiday is closer to the truth.

Not only do Franco Smith's side, hammered 48-7 by Wales yesterday for a 31st consecutive Six Nations beating, look a third-rate outfit, they now look like many of their players don’t know some of the basic rules of the game.

But today’s game against Scotland, who Ireland have beaten in nine of their last ten encounters, is the real deal.

Gregor Townsend's men are coming in cold in terms of game time. Their round-three tie against France was postponed due to a Covid-19 outbreak in Les Bleus ranks.

The 138th meeting of the sides (with 66 wins each) is not only a real test of Ireland's character but indeed a test of the team’s claims to have made progress under Farrell, who took over at the end of 2019.

"The calibre of player, the calibre of coaches that we have," captain Johnny Sexton replied when asked what excites him about the current crop, who have lost two of their first three games this year.

"I said it to the lads before the Italy game that I am more confident about where we’re going than I have ever been.

"I’m still of that mind but we need to go out and keep proving it on the pitch."

And on the pitch so far, it’s been a real mixed bag.

References from within the Ireland camp to the 21-16 loss to Wales always come with the '14 men’ caveat but that reasoning for defeat would carry more weight had Peter O’Mahony’s dismissal been unfair or came after a poor referee’s call.

It wasn’t an act of God, or even an act of Wayne Barnes, Ireland had to play a man down for more than an hour in Cardiff because of something that Ireland did.

The tape shows that Ireland lost 15-13 to France, a ‘one-kick-of-the-ball’ game in scoreline only. Ireland were missing some key players on the day, yes. But so were France.

The more we see of Italy, the less impressive the six-try win (that, in fairness, was an improvement) in Rome becomes. 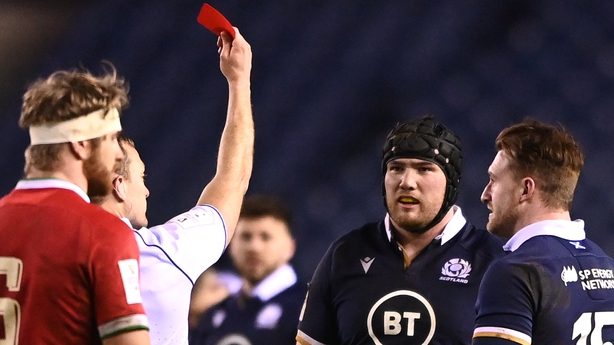 The postponed France game meant meant the Scots have had to stew for even longer in the ignominy of the 25-24 defeat to Wales, in which they blew 17-3 and 24-20 leads. Zander Fagerson’s crazy red card in the 53rd minute didn’t help their cause.

But it’s their impressive 11-6 win over England that has Ireland worried as they at last lived up to their own (usually skewed) expectations, as outlined eloquently by colleague Conor Neville.

Had the Scots been slightly more clinical in Twickenham, Eddie Jones’ men wouldn’t have been within a sniff at the end.

"I think their strength is their belief," said Farrell of the hosts, who are looking to avoid a third straight home defeat, which includes the Autumn Nations Cup.

"They 100 per cent believe they are on an upward curve and rightly so because we have seen some really good performances from them.

"Was it a surprise to us that they went to Twickenham and came away with that victory? Within that game they grew their belief, didn't they?"

The foundation of Ireland’s success over the Dark Blues in recent years has been a pack that has been able to out-muscle their opponents.

The visitors today have the slightest of weight advantages here, the forwards average weight is 111.8kg versus 110.1kg for the Scots.

"We know it's going to be a real physical contest and that Ireland will have some time in our 22.

"We just have to make sure they don't come away with points on a regular basis and we must make sure we take our chances when we get them."

Scotland will prioritise, as they did against England, playing the smart game in the tight, which, in turn, will allow time and space for their player-makers, out-half Finn Russell and full-back Stuart Hogg, room to manoeuvre.

Captain Hogg, despite having played just two games in the tournament, leads the 'defenders beaten' list with 14.

Scotland v Ireland: All you need to know

"Those two players will either play with their dinner suits on or not because of the speed of ball that they will require to be able to play into space," said Farrell.

"And it's up to us to make sure that we slow that ball down for them so we can put some pressure on them ourselves." 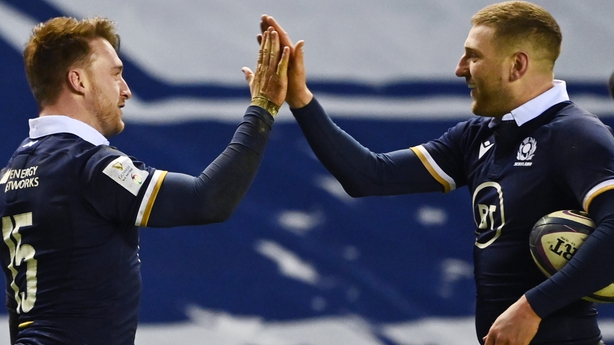 Incidentally, this is the first time since the World Cup that Ireland’s defence will have to deal with Russell, who was absent for the last two encounters.

Level with Sexton, Russell has made five passes that have led to clean breaks in the competition so far.

Scotland have made four changes to the side that lost out to Wales a month ago. WP Nel gets a first start since the World Cup, coming in for Fagerson, while Sean Maitland, Sam Johnson and Jamie Ritchie also start.

Farrell has opted to retain Jamison Gibson-Park ahead of the injury-free Conor Murray, while the front row is freshened up with the inclusion of Cian Healy and Rob Herring. For the day that's in it, Keith Earl switches in for Jordan Larmour on the right wing, the Munster man’s aerial prowess preferred for the occasion.

While Ireland are fighting to produce hard evidence that things are going in the right direction, Scotland are fighting for hardware in the shape of a Guinness Six Nations title. It's 1999 since they last won the championship.

The wind was knocked out of Ireland's sails by two losses, but Scotland are still in the race.

We’ve seen in the past that having something tangible on the line often gives a team that extra per cent in desire and in a game that is bound to be tight, that could just make the difference.