Wales moved to within one step of a Guinness Six Nations Grand Slam after scoring seven tries in a comprehensive thrashing of Italy in Rome.

Wayne Pivac's side, fresh from sealing the Triple Crown against England, made short work of the error-plagued Azzurri and will clinch a stunning Grand Slam if they beat France in Paris on 20 March.

Tries from Josh Adams, Taulupe Faletau and two from hooker Ken Owens ensured that the bonus point was wrapped up inside 30 minutes at the Stadio Olimpico.

George North, substitute Callum Sheedy and Louis Rees-Zammit dotted down to compound the hosts' misery in the second half, with Montanna Ioane's try providing their only consolation.

Wales sit top of the table with 19 points, but second-placed France on nine points face England at Twickenham later on Saturday and have a game in hand at home to Scotland still to come.

Italy, who suffered their 31st consecutive Six Nations defeat, are rooted to the bottom of the table with zero points, having conceded 187 points in their four defeats so far.

As it happened: Wales outclass Italy

Flanker Josh Navidi was named man of the match and told ITV Sport: "We got the job done. We knew it was going to be tough coming out here and that showed with Italy coming towards us at the end.

"We came here to play an open game and we can look forward to next week. We're taking it game by game, we're moving forward that way and we'll build into that on Monday." 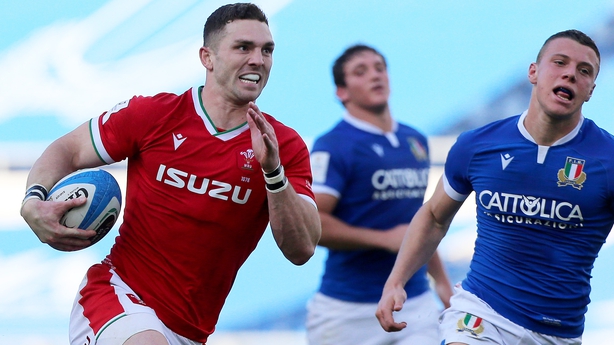 Pivac made two changes following the victory over England a fortnight ago, replacing injured scrum-half Kieran Hardy with Gareth Davies and handing lock Cory Hill a start instead of Adam Beard.

Italy showed five switches, including a recall for Wales-born number nine Stephen Varney, who missed the defeat against Ireland last month after being injured during the warm-up.

Wales were off and running inside three minutes as Biggar kicked a 40-metre penalty, and the Azzurri were soon in deep trouble.

Captain Luca Bigi was sin-binned by referee Wayne Barnes - his second yellow card in successive games - and Wales opted for an attacking scrum, rather than kicking for goal.

It reaped an immediate reward as Wales moved possession wide before Biggar's long pass found Adams, who crossed for his 16th Test try, with Biggar converting.

Wales struck with a second try after 14 minutes while Bigi was still off the pitch. 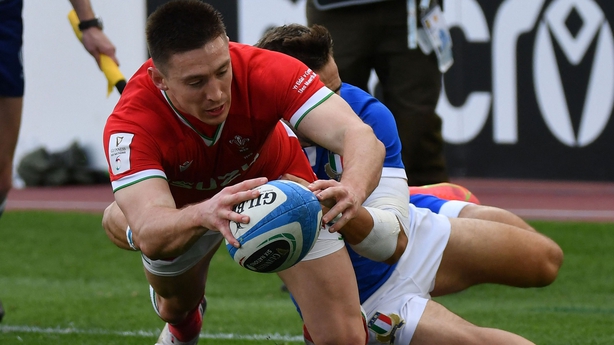 Rees-Zammit had already threatened Italy's defence and he delivered a scoring pass to Faletau following another sweeping attack as Wales effortlessly moved 15-0 ahead.

Italy could not live with Wales' pace and intensity, and a third try arrived when the Welsh forwards drove menacingly from a short-range lineout and Owens touched down.

Biggar's successful conversion made it 22-0 as Wales rattled along at a point a minute.

Owens delivered Wales' fourth try when he stretched out to touch down following another powerful forward surge, and Italy were in disarray as their troubled afternoon continued when prop Giosue Zilocchi went off injured, being replaced by Marco Riccioni.

Rees-Zammit had a try disallowed five minutes before half-time after a forward pass by Biggar, but Wales were in cruise control, leading 27-0 at the break.

Italy collected a second yellow card of the game when Riccioni departed for a dangerous challenge on Willis Halaholo, and Wales moved past 40 points on the hour-mark after Sheedy converted his own try.

And Wales added one more try - a 70-metre interception effort by Rees Zammit - as the Gloucester speedster claimed a fifth touchdown in just his eighth Test.