Ross Byrne was an unfortunate victim of circumstance when Ireland fell to a 57-15 defeat to England, according to Bernard Jackman, who believes the out-half was "set up to fail".

The squad, then under coach Joe Schmidt, had been in a training camp in Portugal in August 2019 before travelling to London, where they met a rampant England team that ran in eight tries.

"Quite frankly it's hard to describe it without using a lot of profanity," said captain Rory Best after Ireland had shipped a record-breaking hammering.

It was Byrne's third cap and first start and saw him lose out on a place in the World Cup squad, which was named just over a week after the match.

Connacht’s Jack Carty took the spot on the plane to Japan alongside Sexton and Joey Carbery.

Now, with Sexton injured and Billy Burns, who made his debut in last week’s win over Wales, on the bench, it’s 25-year-old Byrne who gets a chance to put things right. The Leinster man is one of four changes made to the side by Andy Farrell.

"He’s probably one of the most mentally strong players in Ireland and he’s been like that since a young age so I think he’ll be able to park that day in Twickenham," former Ireland hooker Jackman told the RTÉ Rugby podcast.

"I think he was set up to fail in terms of the way the whole team performed.

"It had been a heavy week of training in Portugal, arriving in to play an England team who [had a different build-up].

"I don’t think he’ll see that as being a true reflection of his ability. 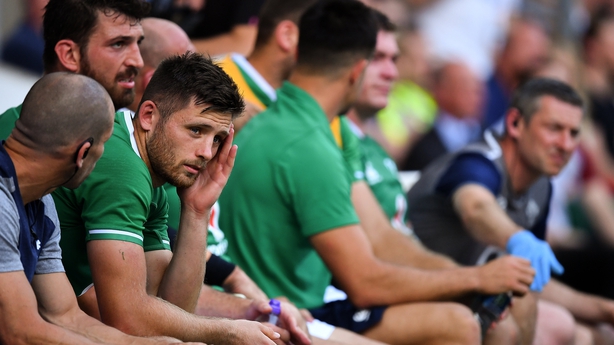 "He’s probably the most like-for-like as a replacement for Johnny and that’s probably why Burns was on the bench ahead of him last weekend.

"He’s surrounded by a team better ready, better prepared to go to Twickenham than that last World Cup warm-up game.

"There’s a lot of competition [at out-half], his own brother [Harry] is putting up his hand as well at provincial level to may be someone who gets into that squad in time.

"I wouldn’t have any worries about Ross Byrne."