It's the Six Nations, but not as we know it.

Ireland return to action after an eight-month Covid-19-enforced break with Italy the welcome visitors to Dublin.

Government regulations mean that this afternoon’s affair at the Aviva Stadium will take place without fans, but such is the way in the current 'new normal’.

Last seen at the end of February, Ireland have had to stew over a fairly sobering defeat to England for much longer than they would have wanted.

The original fixture against Italy was due to take place on 7 March and would have been used as a cleanser, in as much as the usually routine wins can be relied upon, to rid the system of the frustration of Twickenham.

A lot of water has gone under the bridge, both in rugby and in global pandemic terms, since then.

"Listen, we can sit here and moan but we're in a very privileged position to be able to get out here and work and ply our trade," said attack coach Mike Catt when asked about the unusual preparations for a Six Nations game.

"So the bubble, it is what it is, it's what we have to do to get ourselves ready to perform. And hopefully we can try to give a bit of confidence to the rest of the country, and try to drive our message and give something for people to smile about.

"It's tough across the board but, believe me, we're not moaning in camp."

It was somewhat of a mixed bag prior to that 24-12 defeat in London, in which the scoreline didn’t reflect England’s dominance in all areas.

It seems a lifetime ago but Andy Farrell’s reign got off to a fortuitous start with a 19-12 win over Scotland, secured in part thanks to a brain-freeze by Stuart Hogg, the experienced Scotland full-back dropping the ball over the line under no pressure.

The 24-14 win over Wales the following week was more comfortable than the scoreline suggested and hinted at better things to come before Ireland ran into England’s white wall a fortnight later. 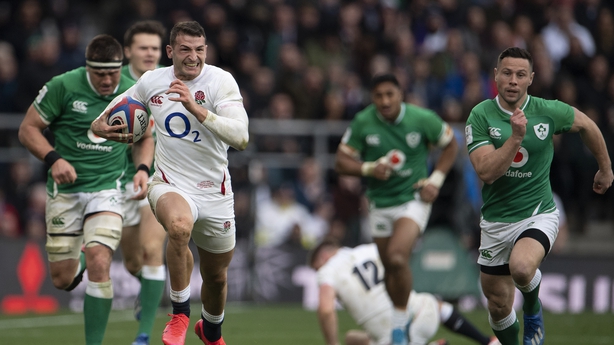 "You’ve got to win your set-piece, simple as that," was Mike Catt’s snappy answer to what lessons could be taken from that loss.

This time last year Ireland had just arrived back from Japan and Farrell had been installed as the new boss.

In the earlier part of the Six Nations the Englishman revealed that he was "getting feedback" from former coach Joe Schmidt.

The enforced break will have provided some separation for the new man and notwithstanding the two games missed when the Australia tour was cancelled it’s time for Farrell to stamp his own image on the side.

There was widespread agreement among pundits that Ireland did not evolve in Schmidt’s final year, a failing that proved fatal for their World Cup hopes.

"I hope that you see an energy in defence that is pretty ruthless," said the 45-year-old when asked what fans can expect today.

"I hope that you see a dynamism in our contact skills that gets the ball back. I hope you see a set-piece that is one that is aggressive and going after them."

Moving away from an overly prescriptive formula, initially extremely successful, is not something that comes natural and Farrell has urged his team to play smart, not just play ball for the sake of it.

The first team announcement of the Restart! @IrishRugby have picked an exciting side for their Round 4 game with Italy this Saturday.

"[As for] playing off the cuff, that's not such a broad term that it means to do anything you want," he added.

"Decision-making is seeing pictures and being ahead of the game and backing the pictures that you see because it's the right thing to do by the team.

"Decision-making isn't just playing off the cuff. It's being able to play what you see and being able to shape the team up in accordance with that."

Ireland will be without prop Tadhg Furlong (calf), lock Iain Henderson (suspended) and backs Jordan Larmour (shoulder) and Keith Earls (back), however, their loss may be more keenly felt next week than today.

Will Connors at openside and Hugo Keenan on the left wing are the Ireland debutants with scrum-half Jamison Gibson-Park and hooker Ed Byrne the uncapped replacements.

The other big call is the selection of Jacob Stockdale at full-back.

🎧 Will a new-look @irishrugby back three inject a freshness to their attacking game against Italy? - @CoghlanFiona gives her views on the @RTErugby podcast . Listen here for full episode 🡆🡆 https://t.co/Kj9pmc34dE pic.twitter.com/tUBJfkDjCH

"He has got great vision; he is able to see things and he has great hands as well," said Farrell of the 24-year-old Ulster flyer.

"He hits a brilliant line and you don't always get to do that from the wing. Hopefully we can get him involved as much as we can."

With all that’s going on and with the intense focus on Ireland you could be forgiven for forgetting that Italy are in this game, too.

Their coach, South African Franco Smith, hands a debut to out-half Paolo Garbisi, the 20-year-old going toe-to-toe with 91-cap Johnny Sexton, a brave call no doubt by the boss.

🇮🇹 A debut for 20-year-old phenom Paolo Garbisi at fly-half and a first start in two years for No.9 Marcello Violi@Federugby are ready for the challenge of Ireland on Saturday in the #GuinnessSixNations

"He looked exceptionally impressive especially against Leinster a couple of weeks ago, he looks very composed in that environment," said backs coach Catt of the Benetton man who also scored 14 points v Ulster earlier this month.

"He’s another huge left-footer, so him having him at 10, [Carlo] Canna at 12 and [Jayden] Hayward as well, you’ve got your left and your right-footed kickers which helps their exit strategy so we’ve got to be aware of that.

"I’ve loved how he’s attacked the line, he’s aggressive when he attacks the line, he sees the space very quickly, so I think he’s going to be very good given time.

"Italy have picked a big pack, their back row is big, Jake Polledri has been playing exceptionally well for Gloucester. So generating quick ball, playing with the width they always have since Franco’s taken over, it’s very much a wide-wide game."

IRELAND v ITALY - ALL YOU NEED TO KNOW

The problem with playing Italy, who haven't beaten Ireland since 2013 – their solitary Six Nations win over the men in green – is that no matter what happens it’s not a primer for the bigger guns.

Yes, Ireland may not cut loose from the start and have to work hard for a four-try win, but, as we saw in the World Cup against Russia and Samoa before New Zealand, that doesn’t generally deliver the team close to the pitch required to take on heavy hitters like France in a week’s time.

But that’s for another day. Today we welcome back international rugby to Ireland and let them at it.