Andy Farrell has revealed that he has been getting "feedback" on Ireland's performances from former head coach Joe Schmidt.

Farrell, whose side take on England in the Guinness Six Nations on Sunday, served as an assistant under Schmidt from 2016 until the end of last year when the Englishman took over the top job.

New Zealander Schmidt led Ireland to three Six Nations titles in the five years prior to 2019 and stood down in the aftermath of another failed World Cup campaign.

Schmidt, who also twice won the Champions Cup in his time as Leinster coach, announced his decision to step down in November 2018 and had planned to move to New Zealand for family reasons.

However, that changed and Schmidt remains in Dublin where he has been keeping himself busy, apparently spotting for his old side, who will claim the triple crown if they beat England.

Former Ireland captain Paul O’Connell is with the team this week to "share his experience and try and connect with the boys", while former team manager Mick Kearney has been in "doing a bit of mentoring".

And speaking to reporters Farrell, who is in his first head role position, admitted that he is keeping in touch with his old boss.

"I spoke to Joe a few times, yeah," Farrell, who has overseen wins over Scotland and Wales in this campaign, said.

"It's always good to get a handle, obviously he's not been in camp or doesn't quite know what we've been trying to do, but it's great to get some feedback.

"He's been to a few games, he's watched the games and obviously will be watching in a little bit more depth than other people so it's always nice to get a bit of feedback."

England will name their team on Friday with Manu Tuilagi, injured during their opening-round defeat to France, expected to return.

The powerful centre caused Ireland no end of trouble in the two games last year and Farrell is well aware of his potential.

"He's obviously been instrumental as far as the way they want to play," he said.

"He gets them over the gainline doesn't he? They've been pretty good, the first lineout was pretty instrumental the last time we played them at the Aviva, all the way through the World Cup - hitting Manu off the top of the lineout and playing both sides of that ruck is quite nice to flow on to. 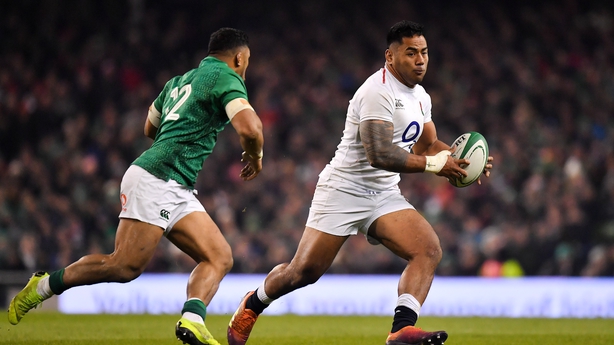 "He has been a handful, he plays the game in great spirit and with a smile on his face for such a big, aggressive man that everyone thinks he is.

"He loves playing, I used to love seeing him coming out with a big smile on his face. I'm sure he'll want to do that at the weekend and might get the opportunity."