Ireland suffered a first defeat under Andy Farrell, losing 24-12 to a rampaging England in a one-sided Guinness Six Nations clash at Twickenham.

Following home wins over Scotland and Wales, Ireland had hoped to put up a fight for a Triple Crown against a team that had been well beaten by France and scraped past the Scots.

But from the outset it was clear that the hosts, following nine games away from home, were more determined to lay down a marker.

First-half tries from George Ford and Elliot Daly, both from Irish mistakes, and an Owen Farrell penalty ensured the contest was over at half-time.

Robbie Henshaw did manage to cross the line in the 50th minute but Luke Cowan-Dickie's try put an end to a short-lived comeback and Sweet Chariot rang out loudly around the famous South-West London Stadium, also the scene of a record 57-15 defeat in a World Cup warm-up game last August.

France, with three wins from three remain top of the table, while England leapfrogged Ireland into second place.

Andy Farrell's side will likely still be in the mix for the championship on the final day with Italy to visit Dublin in two weeks' time before a trip to Paris where France, should they beat Scotland away, will be on course for a Grand Slam.

The opening day defeat by the same opponents set Ireland on a disastrous course last season and despite pre-match concerns about letting the Red Rose get off to a fast start they were powerless to prevent exactly that.

It was a game Ireland could just not gain a foothold in and spent the opening 10 minute deep in their own half.

The stats showed England had 92% territory before Ford opened the scoring.

England's tactic of kicking in behind the Ireland defence worked a treat in last season's game and Ben Youngs was alert to the space following a series of carries.

The scrum-half's kick looked to be covered but Johnny Sexton juggled the ball in the goal area allowing Ford to snatch possession and dot down. Farrell kicked the extras.

All Ireland offered in return was a missed penalty from Sexton in the 14th minutes, the Leinster out-half mis-kicking from just outside the 22.

Farrell's side were struggling to get up to the pace of the English attackers, with the returning Manu Tuilagi and flanker Courtney Lawes, man of the match, all carrying to great effect.

Eddie Jones had selected Jonathan Joseph on the wing for the first time in 50 Tests and it was his break through the middle that set up field position for the hosts' second.

This time, Ford chipped over the top and while Jacob Stockdale looked favourite to clear, it was Daly who was sharpest when the ball bounced to touch down.

"They are a very good team," said captain Sexton. "Two tries from our mistakes, the chip kicks that we knew would come."

When Ireland did attack they did so without anything like the fluidity that had yielded a bonus-point win over Wales two weeks ago, at one stage Murray box-kicking over the top without a team-mate in position to chase.

Robbie Henshaw powers over for @IrishRugby to give him team hope after a torrid first half at Twickenham#ENGvIRE #GuinnessSixNations pic.twitter.com/wqN6WOFteD

Sexton's kicking game, too, was off and the half-back partners that have been central to recent Irish success struggled to make an impact.

The World Cup finalists' defensive line speed was having a huge influence on proceedings with multiple Irish attacks halted before reaching the gain line, Maro Itoje to the fore.

England clearly decided not to over-resource the ruck but Ireland didn't react, insisting on shovelling the ball out to static and outnumbered attackers.

"We were getting the ball on the back foot and trying to get it to the space on the edges...it looked a bit silly at times," said Sexton.

Dave Kilcoyne, who replaced Cian Healy just short of the half-hour mark, did add impetus but the screams of relish from the English defence could be heard ringing out around the stadium as they forced the green line back again and again.

Farrell kicked England out to a 17-point half-time lead with a penalty when James Ryan was penalised for offside and Ireland faced a mammoth task to even get within bonus point territory, which could prove crucial when the tallies come in on the final day.

The 2018 champions needed to reply quickly and a concentrated spell of pressure, which included a CJ Stander and Farrell coming-together, eventually yielded a try with Henshaw barging over from close range.

Sexton screwed his kick wide of the mark and the visitors had 30 minutes to claw their way back.

But it was England who dominated the next 12 minutes, spending that time winning scrums and penalties in Ireland's 22 before Cowan-Dickie scrambled over for the killer score. Farrell floated over the conversion from the sideline just to make sure.

Replacement scrum-half John Cooney, and Stockdale gamely tried to grab a late consolation score, which in the end was secured by Porter barrelling over but this was a day for the English. 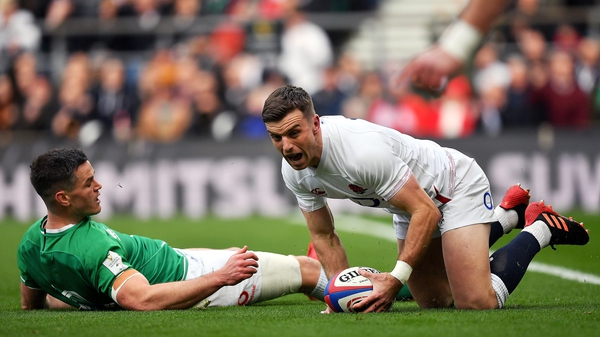