Ireland head coach Adam Griggs is anticipating the challenge of trying to hit the ground running after an extended period of competitive inactivity.

The Irish team prepare for the visit of Italy to Donnybrook in the Women's Six Nations on Saturday, more than seven months after the tournament's remaining fixtures were postponed.

Having beaten Scotland and Wales on home soil, a comprehensive defeat away to England on 23 February was their last match together as a group.

"It will certainly be something that the girls will all get a feel for in the first 10 minutes of this, the lungs will be burning, the full contact aspect of it.

"We're trying to replicate it as much as we can. The beauty of sport science is we've got our GPS and that's helped us track our match intensity and where we've come from in those last Six Nations games. We've used that science as much as we can to again, replicate what we can in training, but again there's no substitute for getting out there and playing.

"It's something we'll be focusing on this weekend, making sure we start fast, trying not to let Italy into the game."

Although Ireland will have home advantage against Italy, the absence of supporters mitigates that somewhat.

"It's certainly something that we've discussed and we have to make sure we create our own atmosphere and buzz within the group really because, for these players, it is something we do look forward to coming into Donnybrook," said Griggs.

"But at the end of the day, it's what happens between the white lines and whether there are fans watching or not, we have to make sure we look after what we can."

Key player, Sene Naoupu, is named in the starting team. Having come off injured in the England match, the centre was sent for an MRI scan, which revealed a tumour in her neck.

The tumour was successfully removed after surgery in July and her international head coach is glad that a worrying situation is now in the past.

"Absolutely scary," he said of the situation Naoupu faced.

"It's funny the way the world works. She picks up a rugby injury but finds something else.

"At the end of the day, we're grateful that it was found early and she was able to have the procedure that she had and, along with Lindsay Peat (ankle), was quite lucky with the break in rugby due to the pandemic. It's really afforded them the time to recover and come back, so it's just one of those things."

Another positive is the availability of Beibhinn Parsons, who had been due to miss the remainder of the Six Nations' original schedule due to Leaving Cert commitments.

But this season's tournament top points and try scorer is available to face Italy and France due to the long delay caused by the coronavirus pandemic. Griggs expressed delight at her return to the fold.

"Beibhinn's got that X-factor about her. Everyone has seen that now," he said.

"When you have a player with that X-factor, you want them on your side and again, I know it was a stressful time for Beibhinn through what's happened and it wasn't straightforward for her either so we've had a chat with her, and really at this point, we're telling her to focus on the rugby now and be excited that you can get these games in.

"She's been training really well, she's added a couple of things to her arsenal that I'm excited to see on Saturday." 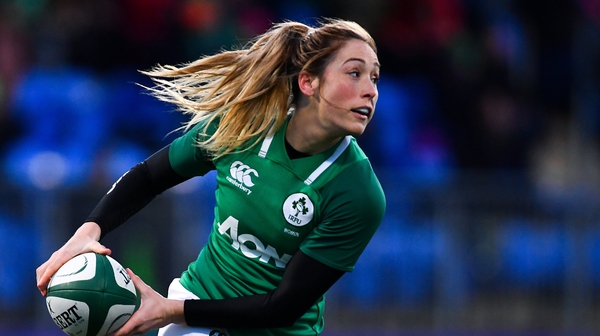