This year has been a difficult time for most people in society, but it's fair to say that Sene Naoupu has had a particularly challenging year.

After having to come off injured in Ireland's Six Nations match against England in February, the New Zealand-born centre was sent for an MRI scan.

It revealed a tumour in her neck, but Covid-19 delayed surgery to remove it until early July, over four months after it had first been picked up.

The surgery was a success, and Naoupu is back training, and has been included in the squad for the return of the Six Nations clash with Italy at Energia Park on Saturday.

But she admits the year has been an exceptional one.

"I'm getting better and better every week," she says at a Guinness media event.

"It's been a challenge, but it's really rewarding for everyone in the squad. I feel good, I feel ready to go."

In terms of her own fitness for the game in Donnybrook, she's not certain that this will be the week she gets to make her return.

"Everyone training has been available, so we'll see how that all goes," is her reply when asked about availability for the Italians. 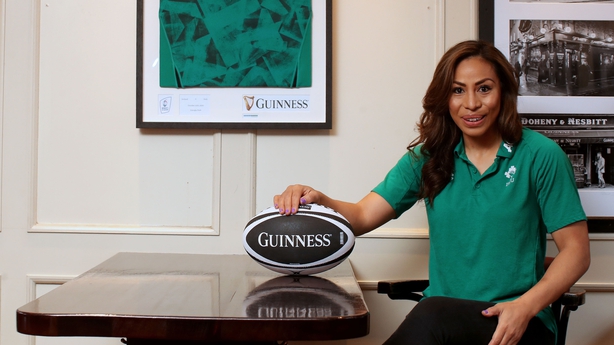 Ireland's plans have already been disrupted this week, with news that Rugby Europe has suspended its games, including the Rugby Europe Women's Championship, until the end of November.

It means a likely delay to planned World Cup qualifiers in December, where the winners of that competition between Russia, Spain, and the Netherlands, were set to play Ireland, Italy and Scotland for the final European qualifying place.

The World Cup is due to take place in Naoupu's native New Zealand, but that's a long way off yet.

For the squad, it's all about feeling their way back into things in the upcoming games.

"The limited time we have is the time to we have to perform together at training, and to get all the detailed work done.

"In some ways it's maybe prepared us to have a more efficient process in how we get our behaviours right for the performance that is required during this time.

"At the end of the day there's no excuses really - we have to put a performance out regardless of if there is a pandemic, or not.

Looking at Friday night's opponents, Naoupu is confident that the squad's preparations have gone well enough to get a result.

"Their front five really get going to give their backs some space to run," she points out.

"Basically if you shut it down, it'll be interesting to see how they'll be able to counter that.

"We've been building for the last number of weeks to a point where we feel like we're in a good place, considering what's happening in the world.

"Training is going well. We've been able to prepare a number of different combinations."