Ireland lock Iain Henderson will miss Ireland's two upcoming rearranged Six Nations fixtures against Italy and France after landing a three-week suspension due to the red card he picked up for Ulster last weekend.

Ulster captain Henderson was dismissed in the 75th minute of the province's 24-12 victory over Ospreys after a review by referee Mike Adamson for recklessly charging into a ruck and making contact with the head of Dan Evans.

The disciplinary hearing accepted that Henderson's actions warranted a red card for foul play. The incident was deemed a mid-range offence, which carries a six-week suspension, with the 28-year-old's clean disciplinary record, co-operation throughout the process and remorse shown warranted reducing the suspension in half.

He will miss the visit of Italy to Dublin Saturday week, followed by the trip to France a week later.

Henderson will however be available to head coach Andy Farrell for the Autumn Nations Cup. The ban runs out at midnight on 9 November, four days before Ireland's first game of the competition at home to Wales.

He has the right to appeal the decision.

Farrell is already without Ryan Baird, in the second row after the uncapped Leinster man was ruled out of the original squad with an adductor muscle injury, with Connacht's Ultan Dillane called up in his place. 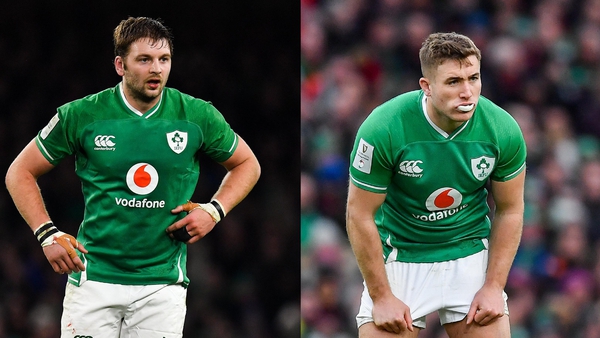