Ireland head coach Andy Farrell will have an anxious wait to see if Jordan Larmour and Iain Henderson will be available for the upcoming re-arranged Six Nations fixtures against Italy and France.

Leinster back Larmour required oxygen on the pitch in the 35-27 victory over Benetton in their Guinness Pro 14 encounter, though was able to walk off the pitch after taking what Leo Cullen described as a "heavy bang" to the shoulder.

Ulster captain Henderson was red-carded in the 75th minute of the province's 24-12 victory over Ospreys.

The 28-year-old was dismissed, after a review by referee Mike Adamson, for recklessly charging into a ruck and making contact with the head of Dan Evans.

Ireland are due to face Italy at home in a fortnight in Dublin before a trip to France a week later and the lock could miss out on both due to suspension, and potentially even the start of the Autumn Nations Cup in mid-November.

Both players were part of the 35-man Ireland squad named last week.

Farrell must also await the damage done to Larmour’s shoulder after his game came to an end in the 48th minute.

Speaking to Leinster Rugby post-match, Cullen admitted it is speculation until the tests are carried out.

"Jordan has taken a pretty heavy bang to his shoulder so we’ll get him assessed," he said.

"You could see he was in a fair degree of discomfort and stayed down for a while. We will get him scanned when we get back and we'll see the extent of that then." 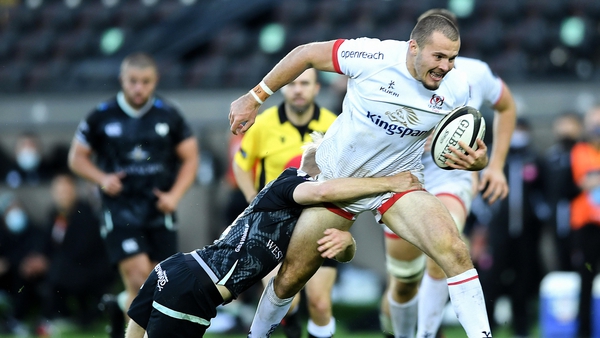