Joe Schmidt has at least three enforced changes to make to his Ireland team to face Scotland and a positional switch is on the cards as the champions look to get their title defence back on track.

Saturday’s defeat has left its mark both physically and mentally, with Dave Kilcoyne speaking today of a pack that needs to front up at Murrayfield following the bruising encounter against England.

CJ Stander was ruled out yesterday, while today it was confirmed that Garry Ringrose (hamstring) and Devin Toner (ankle) won’t make the trip to Scotland, with return dates unclear.

Scrum coach Greg Feek is hopeful the pair will be fit to face Italy in round three, while it appears that Keith Earls will be ready to face the Scots.

So who will come into the team for Saturday?

Robbie Henshaw’s performance at full-back has been perhaps the major talking point from an Irish perspective following the 12-point loss.

The question of whether he continues at full-back, or back in midfield may well have been removed with Ringrose ruled out.

The Leinster man could well slot back into outside centre to replace his provincial team-mate, which would leave Rob Kearney and Jordan Larmour battling it out for the 15 jersey.

Henshaw’s lofty standing in the group hasn’t diminished after a difficult outing at the Aviva Stadium.

"Even when you say Robbie Henshaw, the name, what he's done. Having him on the field is the first thing," Feek told RTÉ Sport.

"The way he positions himself, he's a pretty smart player and he's one of those guys, he could probably play as a forward. He's tough."

Could the switching of positions have a negative effect on the player?

The pressure is building as the champions look to avoid back-to-back defeats and Schmidt may well turn to Kearney for his experience.

The full-back will be bidding to win his 87th cap and his renowned positional sense, composure under the high ball and defensive strength could well be enough to see off Larmour’s claims, who himself is likely to profit should Earls suffer a setback before the weekend.

Last week Schmidt admitted Kearney had simply "run out of time" to prove his fitness after a shaky return to action for Leinster the week before, but looks well placed for a comeback after coming through training this week

"When his body's feeling good, he's got good energy and experience," Feek said.

"I'd say he's probably delivering coffees to Joe over the last few days as well."

Shorn of the services of Iain Henderson, Tadhg Beirne and now Devin Toner, Quinn Roux is set for promotion from the bench to partner James Ryan in the second row.

Now in his eighth year in Irish rugby, the 28-year-old is highly regarded by the Irish management team and deemed ready to make his first Six Nations start

"Quinn did really well at the weekend, he came on and put a couple of big hits in," Feek observed. "He's been leading the line-out in Connacht this year, he's really progressed there and matured as a player.

"He's been in our environment since the 2016 South Africa tour. He’s good in the scrum, mauling, as a tight forward he ticks a lot of the boxes."

It will then be a straight choice between Ultan Dillane and Billy Holland for a spot among the replacements.

Stander’s absence has several players leading the chase for the number 8 jersey, with Seán O’Brien in pole position.

The Leinster man replaced Stander against England and having missed the entire 2018 Grand Slam campaign, will be itching to contribute to the Irish cause.

It's a position well stocked with options. Jack Conan has risen in the Irish pecking order through O’Brien’s absence in the last couple of years, while Jordi Murphy is another trusted Schmidt lieutenant.

Rhys Ruddock, such a consistent performer whenever called upon, is also in the mix, but very much a long shot given the wealth of options available. Murphy's versatility in the backrow would make him the likely bench cover if not selected to start.

Some intriguing decisions for Schmidt who has never been afraid of making big calls. 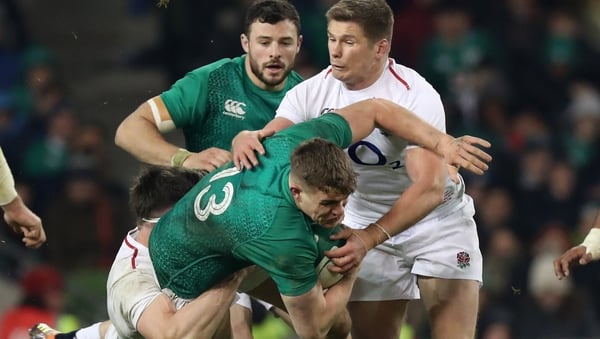 Ireland minus Ringrose and Toner for Scotland clash