A Munster win in the final round of the Heineken Champions Cup pool stages will guarantee a quarter-final spot. It could even land a home tie, but Johann van Graan sees plenty of room for improvement.

The Munster head coach watched on as his team dismantled Gloucester last Friday night and have a four-point cushion over visiting Exeter this Saturday at the top of Pool Two.

A win guarantees European rugby for at least another game, with a number of permutations possible.

The win at Kingsholm was achieved with a dominant pack, Conor Murray and Joey Carbery imperious at half-back and a back division fully in tune with its nine and 10.

Still Van Graan has identified areas that need addressing in camp this week.

"We left one or two tries out there," he told RTÉ Sport. Their kick-off strategy was not flawless and he singled out an attacking scrum that went awry.

"You’ll never be happy as a squad. We search for perfection and we’re still a long way from it. That’s why we start at zero again.

The Chiefs come to Thomond Park looking for a win that would seal their first foray into the knock-out stages. As far as the South African is concerned, Rob Baxter is the man at the helm of one of the mot impressive sides in club rugby.

"I have said it many times, they are one of the teams I respect the most in rugby. The way they conduct themselves as a club, the way they play, they really know what they are about.

"This [Thomond Park] is where we love to play. We are strong, we believe in our squad, in the individuals and the supporters"

"They are a physical side with a very good attack and kicking game. We are looking forward to meeting them."

The sides drew 13-13 at a windswept Sandy Park earlier in the season and Van Graan is hopeful that a full house in Limerick will help the men in red on their quest for victory.

All of the latest news from the Munster Rugby camp ahead of their crunch European Champions Cup meeting with Exeter on Saturday. #RTERugby pic.twitter.com/rqwEZMNQja

"This [Thomond Park] is where we love to play. We are strong, we believe in our squad, in the individuals and the supporters.

"We need to recover this week and prepare as well as we can to turn up on Saturday evening.

"A European quarter final is at stake." 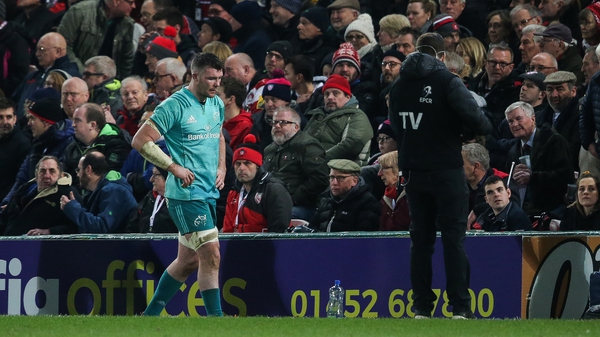