Munster took a giant step towards the Heineken Champions Cup quarter-finals and dumped Gloucester out of Europe after a convincing victory at Kingsholm.

Fly-half Joey Carbery ran the show, bumping his opposite number Danny Cipriani off centre-stage through a brilliant 26-point haul that included two tries.

Centre Rory Scannell and wings Keith Earls and Andrew Conway also touched down, although there was a possible concern for Ireland boss Joe Schmidt ahead of the Six Nations when Munster captain Peter O'Mahony went off nursing what appeared to be a rib injury just after half-time.

Gloucester managed tries by wing Ollie Thorley and prop Fraser Balmain, plus a Billy Twelvetrees penalty and conversion, yet they remain bottom of Pool Two after Munster opened up an eight-point lead at the top.

And the two-time champions, who claimed a five-point maximum from their west country victory, will be guaranteed a place in the last eight if they beat current Gallagher Premiership leaders Exeter at Thomond Park  next Saturday.

Cipriani returned after missing Gloucester's last three games due to a chest injury suffered in the Champions Cup home defeat against Exeter, while Thorley also featured and Franco Mostert switched from lock to blindside flanker.

Munster head coach Johann Van Graan, meanwhile, made a number of changes from the side that beat Guinness PRO14 opponents Connacht last weekend, including starts for Scannell, Mike Haley and Dave Kilcoyne. 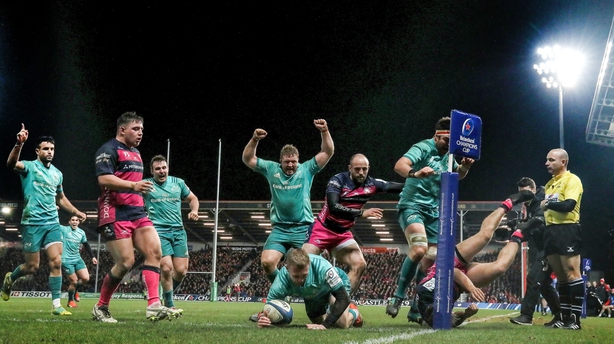 Kingsholm was packed to the rafters, including a sizeable Munster contingent, and Gloucester made a bright start as they dominated early territory before their opponents sought a foothold.

It proved the start of a 13-point scoring burst in seven minutes, with Munster exerting relentless pressure through number eight CJ Stander's tackle-breaking running, and Gloucester ran out of defensive numbers as Carbery crossed for a try that he also converted.

And even when Gloucester infringed close to halfway, there was no escape from Carbery as he kicked another penalty to open up a 10-point lead for his team and send warning signals flashing around Kingsholm.

But matters continued to deteriorate for Gloucester, and they were stung by a second Munster try during the dying moments of a one-sided first half. 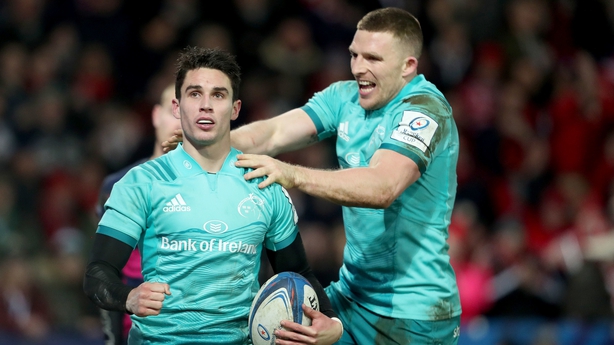 Carbery added the conversion to put Munster almost out of sight at the break, leading by 17 points and aiming to take a vice-like grip on their qualifying group.

Gloucester had to score first in the second period, and they duly obliged following a punishing passage of play after O'Mahony went off.

Munster were forced into a prolonged rearguard action as Gloucester went through 35 phases before Cipriani's long floated pass found an unmarked Thorley, who continued his rich vein of form by crossing unopposed.

Twelvetrees missed the angled conversion attempt, but no sooner had Gloucester given themselves a glimmer of hope than Munster ruthlessly snuffed it out when replacement back-row forward Billy Holland delivered a brilliant off-load to Earls, who dived over.

Conway then unluckily saw a try disallowed following a forward pass by centre Chris Farrell, but Munster were home and dry, even before Conway crossed and Carbery claimed an interception score to compound Gloucester's misery, with Carbery also contributing five conversions and two penalties.