The defending Six Nations champions open their campaign in three weeks’ time against England in Dublin.

McGrath was helped off in the 60th minute of Leinster’s 29-13 win over Toulouse at the RDS after receiving treatment on the pitch following a collision with a French player. 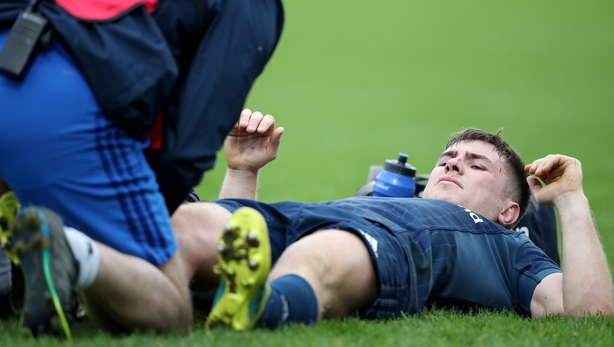 It was was described on the Leinster website as a "worrying leg injury".

Coach Leo Cullen said afterwards that the 10-times capped scrum-half came off due to a knee injury and that he appeared to be in some pain.

"Lukey has done something to his knee, we'll get that assessed," he said.

In Belfast, Ulster had to replace Cooney with David Shanahan before kick-off in their impressive win over Racing 92.

The former Leinster and Connacht man, who has four caps, "failed a pre-match fitness test" according to the Ulster website. It is believed that issue relates to his back.

TEAM NEWS ?? | A late change for Ulster as @JCooney09 is ruled out through injury. Dave Shanahan now starts in the 9 jersey, with Jonny Stewart on the bench #ULSVR92 #SUFTUMLive pic.twitter.com/Q4XUtcjPH4

Kieran Marmion is the preferred back-up for Conor Murray but the Connacht number nine, who replaced the Munster man in the second half of the November win over New Zealand, underwent ankle surgery after that game and at the time was given a twelve-week recovery period.

Murray himself returned from a five-month lay-off due to a neck injury in November.

Caolin Blade, who has deputised for Marmion, could now come into the reckoning.

The Galway man came on as a replacement for James Mitchell in Connacht’s Challenge Cup win over Sale today.

Speaking at the start of the year, Connacht defence coach Peter Wilkins said: "He is the only player to be involved in every game this season, which is a huge amount for someone who may have had the perception of being the number two behind Kieran Marmion.

"He has obviously grabbed the opportunity."