Jacob Stockdale scored two tries as Ulster took a giant step towards the Champions Cup knock-out stages with a dramatic win over Racing 92 in Belfast.

Dan McFarland's men now have 18 points and face a trip to Leicester next week, hoping that a win or bonus points will be enough to earn a quarter-final spot as one of the best runners-up.

"This is a massive performance and massive achievement," Stockdale said.

"We are really pleased with how we played. To topple a French side like Racing is massive.

"We are just happy to get over the line and come away with the win."

Ulster, who lost scrum-half John Cooney to injury in the warm-up, suffered a 44-12 loss in the reverse fixture and were determined to start off on the right foot in the Kingspan Stadium.

It took just two minutes for the hosts to go ahead as Billy Burns slotted over a penalty. 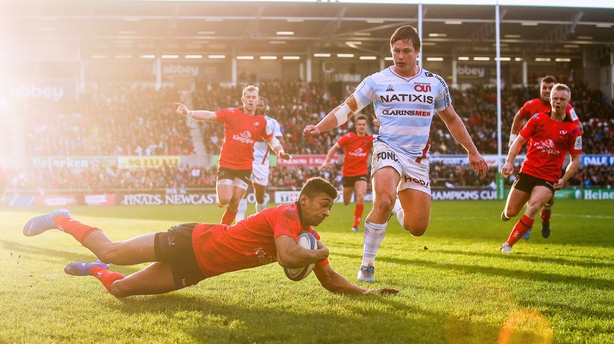 European debutant Robert Baloucoune then crossed for Ulster's first try on eight minutes, finishing off a backs move in the corner, Burns missing the extras.

The 1999 champions got the benefit of the doubt six minutes later when Stockdale beat his man out wide and scorched home, the try awarded after a TMO consultation that referee Matthew Carley, who went off injured at half-time, adjudged provided no clear evidence of a forward pass.

Unbeaten to this point, Racing responded with two tries in a six-minute spell, Virimi Vakatawa and former Munster man Simon Zebo touching down either side of a Will Addison penalty to leave the score 16-10 at the break. 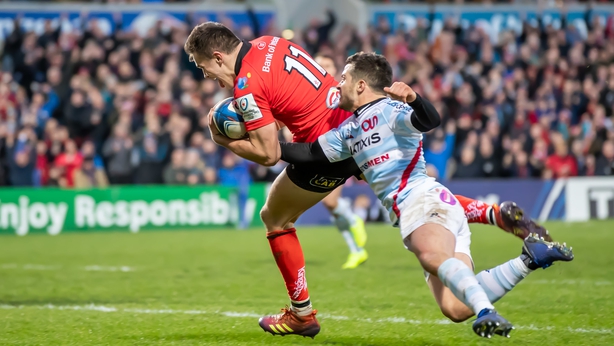 Stockdale got his second nine minutes into the second period and it was almost a carbon copy of his try for Ireland against New Zealand in November.

The winger took the ball in his own half, pushed aside Olivier Klemenczak and kicked ahead, the bounce leaving three Racing defenders floundering, before collecting and diving over.

"Sometimes the ball sits up for you and sometimes it doesn’t," he said. 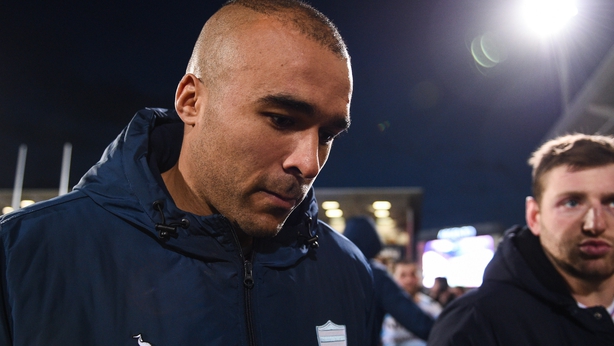 Addison landed the conversion but the Paris outfit soon hit back.

Last year's beaten finalists crossed in the 58th and 65th minutes through Brice Dulin and Teddy Iribaren respectively, crucially missing the first conversion to trail by one.

Racing came again - Juan Imhoff having his 75th-minute try ruled out for a forward pass - but the home side somehow relieved the siege and Addison's last-minute penalty helped run the clock down to a memorable win.