Connacht drew level with Sale at the top of pool three in the Challenge Cup after edging past the Premiership outfit in a gutsy 20-18 win in Galway.

Kyle Godwin and James Mitchell scored first-half tries with Jack Carty converting both and adding a penalty as they took a 17-0 lead.

But Sale rallied and tries from Chris Ashton, Francois De Klerk and two penalties and a conversion from De Klerk saw the Sharks go 18-17 ahead.

However, David Horwitz's penalty nine minutes from time won it for the province. 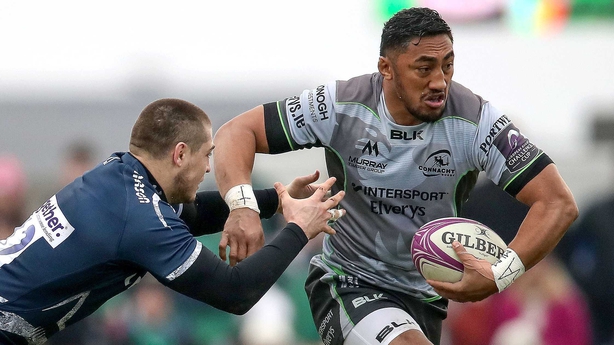 Elsewhere, Worcester extended their advantage at the top of pool two with a 20-18 win at Ospreys.

That sees the Warriors move five points clear with just a game remaining in the pool stages of the competition.

Tries from Keelan Giles and Olly Cracknell and a penalty and conversion from Luke Price saw Ospreys lead 15-7 at the break, Jonny Arr's try converted by Scott Van Breda the reply from the Warriors.

Ollie Lawrence and Dean Hammond scored second-half tries for Worcester to put them ahead but Sam Davies' penalty saw Ospreys re-take the lead until a last-minute drop-goal from Ryan Mills won it.

Harlequins climbed to the top of pool five with a 31-20 win over Grenoble.

Tito Tebaldi scored a hat-trick of tries as Benetton beat Agen 38-24 in the other game in pool five.

Nick Fenton-Wells also grabbed a hat-trick of his own to lead Bristol to a comprehensive 65-9 pool four victory over Enisei-STM.