Ireland and Munster flanker Peter O'Mahony will be assessed on Monday to examine the extent of a rib injury that forced him out of the Heineken Champions Cup win over Gloucester on Friday night.

The captain was replaced in the 45th minute by Billy Holland.

"Peter is in a bit of pain," coach Johann van Graan said after the 41-15 victory that put his side eight points clear in Pool 2 ahead of today's clash between Exeter and Castres.

"It looks like a rib, but we will take our time on it and reassess on Monday. Sometimes it heals quickly and sometimes not, so I've got no update but it's definitely a popped rib."

Munster host the English Premiership leaders next Saturday, while Ireland begin the defence of their Six Nations crown on 2 February.

"We knew this was going to be a massive game tonight. We showed good patience, and we will take this bonus point win away from home," added the South African coach.

"Joey [Carbery] capped it off with a special performance. That's three weeks in a row that he hasn't missed a goal-kick, and his decision-making was excellent."

Meanwhile, Gloucester boss Johan Ackermann was left to reflect on a "clinical" Munster performance after his team were unceremoniously dumped out.

Munster took a giant step towards the quarter-finals with a crushing victory at Kingsholm.

Fly-half Carbery ran the show, bumping his opposite number Danny Cipriani off centre-stage through a brilliant 26-point haul that included two tries.

"Munster were so clinical, and that's where we need to get to," Gloucester head coach Ackermann said.

"We were probably our worst enemy tonight, and they were good when they had the ball." 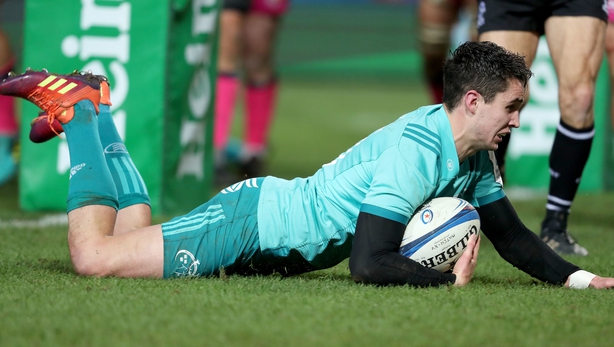 It was Gloucester's third successive home defeat in all competitions, and Ackermann added: "It's not nice, especially losing at home. We have lost to good sides, yes, but it is disappointing because again we had a lot to play for.

"We speak a lot off the field and we know where things go wrong, and it is time for us to fix it on the field.
"The answers are on the field. We can all catch a ball, we can all tackle - we must just do it better.

"Hopefully, this is our bad part of the season, and we can pick it up from there.

"If you look at their squad, their half-backs play very well, they have got a hard-working pack of forwards, a good set-piece and they have got physical backs.

"There is no reason why they can't go all the way [in this season's tournament]."

Gloucester managed tries by wing Ollie Thorley and prop Fraser Balmain, plus a Billy Twelvetrees penalty and conversion, yet they remain bottom of Pool Two after Munster opened up an eight-point lead at the top.

And the Irish heavyweights, who claimed a five-point maximum from their west country victory, will be guaranteed a place in the last eight if they beat current Exeter in Limerick next Saturday.