Eddie Jones made light of being booed by disgruntled supporters after England's 24-15 defeat at Twickenham that saw Ireland crowned Grand Slam champions.

After winning back-to-back Six Nations titles in his first two seasons, he has now guided England to their worst performance in the tournament in the new millennium.

Wales' 14-13 win over France in Cardiff condemned England to a fifth placed finish in the championship.

Jones was jeered as he gave his post match interview on the pitch - a first for the Australian whose 28-Test reign has now been marred by three successive defeats.

"I didn't hear it. Have you got a recording of it, I'll listen to it later, it'll put me to sleep tonight," Jones said.

"The only thing I can control is coaching the team. I can't control what you say, what the crowd does. All I can do is coach to the best of my ability.

"You have these runs and I have coached long enough and sometimes you get out of it quick and other times longer.

"At the moment it's got to three games, its not nice but it is part of the process of being a better team.

"We learnt a lot about the team in this Championship and how we need to develop our game, which is important. So as disappointing as it is, it's part of being a better team.

"Every team I have had that has been a champion team has had these runs and they are instrumental in how you remake a team.

"When you take over it is reasonably easy, like I did with England, to improve a team quickly because you fix things that need fixing quickly.

"But internal mechanisms take time to fix and that is the slow burner. Unless you fix them they catch up with you when you get to the big tournaments such as the World Cup."

"I don't think we have. In terms of results we have, but in terms of where we want to go as a team, we are moving forward. I know that is hard to see," he said.

"There is nothing that stands out that we massively need to fix. There are a number of things that are ongoing.
"We have spoken about leadership density - having more leaders on the field - and that is something that is a slow burner, you have got to build that, you have got to keep working on it."

Jones hinted that some players involved in this year's Six Nations may not appear at the World Cup in 18 months.

"Some guys have come in and done really well and some will maybe struggle to participate in the future. We have to get a greater depth to our squad that can play test rugby," he said.

"There are some guys who are starting their international careers and they need time. I have to decide whether I have got time to get them ready for the World Cup." 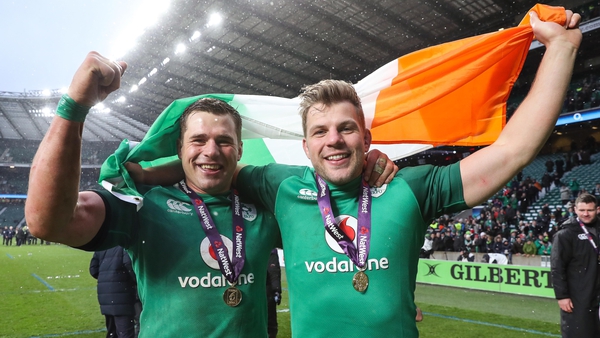