Ireland produced yet another powerful performance to wrap up the Grand Slam with a comprehensive victory over England at Twickenham.

After four wins from four in the NatWest 6 Nations, Joe Schmidt's men delivered just the country's third clean sweep, adding to the glories of 1948 and 2009.

A battle royale was predicted ahead of kick off and so it developed.

Ireland, as is now their trademark, kept possession, piled on the pressure and were rewarded with first-half tries from Garry Ringrose, CJ Stander and Jacob Stockdale.

A Conor Murray penalty was their only score in the second half but it was enough as Eddie Jones' men fell to their third defeat in a row as St Patrick's Day belonged to the Irish.

Ireland had made just the one change, while England had seven new bodies in their line-up.

It told early on as the hosts struggled to tune into the same frequency, while, on the other hand, the already crowned champions took the game to the opposition.

It yielded dividends immediately when Johnny Sexton pumped up a perfect up-and-under that Anthony Watson fumbled, giving Ringrose a simple touchdown. The out-half converted to hand Ireland a seven-point lead in the seventh minute.

England had briefly visited the Irish 22 but were sloppy in possession and only for a knock on near the line from Bundee Aki, they would have been in more trouble.

Sexton then missed a chance to extend the lead with a penalty a few moments later after England failed to roll away at a ruck.

But again, as happened against Wales, the lost opportunity paved the way for another try, this time Stander finishing off against the butt of the post after a brilliant Aki burst after being set free by man of the match Tadhg Furlong.

It was one-way traffic in front of 82,062 in the Twickenham snow.

"Their work in the contact has been as good as we've seen in the championship" said Donal Lenihan on RTÉ Radio 1. "England have no answer."

Then the home crowd screamed for a high challenge call against Aki. Referee Angus Gardiner took his time before giving them half of what they wanted. Penalty only and no card for the Connacht centre.

It was the first of four penalties conceded close to the line and the last of those, 12 minutes from the break, led to Peter O'Mahony being sent to the bin.

However, an overthrow by returning captain Dylan Hartley allowed the visitors to clear as Sexton wiped blood off his face.

Eventually the green defence was breached, Owen Farrell kicked low behind the line and Elliot Daly ran on to the grubber and dotted down, but the fly-half missed the extras.

Meanwhile, Joey Carbery replaced Sexton, who required a HIA, captain Rory Best also needed some attention but stayed on. Ireland were under pressure.

But, with the pack down a man, England conceded consecutive penalties at a scrum and lineout to allow Ireland push in their half.

From there, Stockdale found some space on the wing. Chipping over the cover, the Ulster man won the race for the touchdown, claimed the outright record for tries in a Six Nations campaign (7), and Ireland had a 21-5 lead at half-time.

It was the third time in three games that Ireland had scored with the clock in red in first-half overtime.

England burst out of the blocks in the second half and looked destined to score.

A concerted period of pressure was repelled by a series of chop, smother and tap tackles and ended with a neck-roll penalty against Daly on Rob Kearney.

From there Ireland worked their way up the field but conceded a penalty and then lost Aki to another HIA.

Jordan Larmour came on for his third cap and his burst almost resulted in a try in the corner.

No matter, Murray took over the kicking responsibility and extended the lead to 19 points with a penalty on the hour mark.

The possession and territory stats were even but Ireland's ability to return from the red zone with a score was killing England.

But then a penalty call against the otherwise excellent Kearney allowed England to work a score, Daly again finishing off on the wing. Farrell, again, off target with the conversion.

"Oh God, imagine if it was a draw!" said Lenihan as Sexton eventually bowed out having given everything to the cause throughout the campaign.

Carbery was off target with a penalty from near the halfway, handing England a chance to counter.

Daly threatened as Keith Earls received attention, Ringrose, who stood out once again, covered and won a scrum for Ireland.

On came Kieran Marmion to stand on the right wing, as he had done against Australia in 2016, to shore up the defence as Earls departed.

Jonny May scored a consolation try with the last play but it mattered not. Ireland had completed the Slam and the celebrations began. 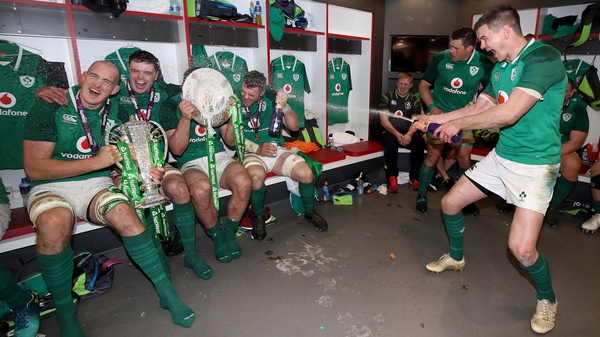 10-year chase ends for Sexton and his 'general insanity'