Johnny Sexton admits he feared his chance of winning a Grand Slam had passed him by, and has urged the young crop of players to maintain Ireland's upward trajectory.

Three years ago, Grand Slam hype was all-consuming leading into the fourth game away to Wales. After easing past Italy in the opening game, England and France were seen off. A tricky away tie in Cardiff, followed by a visit to struggling Scotland and the clean sweep was theirs.

Warren Gatland’s side failed to read the script on the day Paul O’Connell won his 100th cap, a 23-16 win putting paid to Ireland who would go on to claim the Championship.

Standing in the bowels of Twickenham after helping Ireland to five wins from five in 2018 with a 24-15 success, the Ireland out-half admitted small margins are always the difference in Test rugby, as he remembers only too well from the recent past. 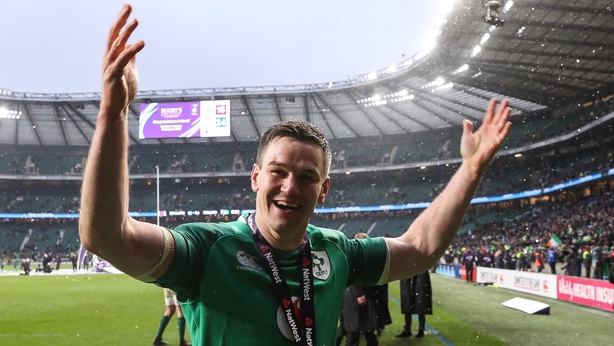 "There were a few times we came so close," he told RTÉ Sport.

"I remember going to Wales away and Scotland at home to finish and we were talking about it then and we came up short. It was Paul O’Connell’s 100th cap. Trying to do it for him was maybe too much pressure at the time.

"Yeah, I thought it was going to evade us."

"Since then, for the last 10 years, I’ve been chasing it. We have come close a few times. The difference between us winning a Grand Slam and not, hinges on a few moments over the eight weeks."

Match-winner against France, man of the match against Scotland last time out, the Leinster out-half has again reinforced his place in the outstanding 10 in the northern hemisphere, arguably the most defensively complete out-half in world rugby.

A bloodied Sexton departed the field before passing the head injury assessment (HIA) before he was eventually replaced by Joey Carbery after the interval. His contribution, particularly in the defensive line, was not lost on Schmidt. 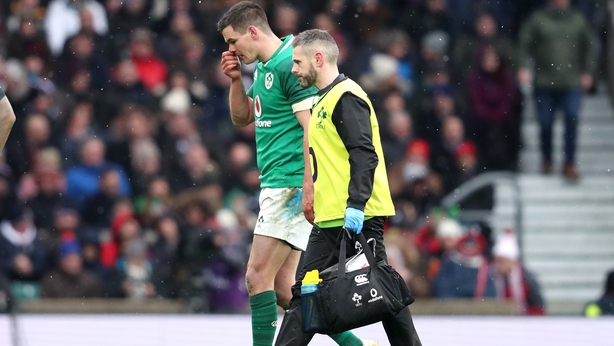 "Johnny attracts a fair bit of attention, and he's perfectly happy with that," he said.

"Some of the attention he brings on himself, trying to smash people back when he's standing on the tryline, making sure they don't get over it. That's how he bloodied his nose in the first place.

"Then he was fine, he was totally coherent, but he was starting to fatigue, for sure, just because of the workload, his confrontational tackle ability, his commitment and general insanity.

"I got some very special messages, an incredible message from Ronan O’Gara"

"He's such a fantastic contributor to the group. And his intellect, he runs such a sharp game.

"His high kick was pinpoint at the very edge of Rob Kearney's reach to lead to the first try, and he's just such a good decision-maker."

The out-half was a model of composure throughout – Schmidt singled out his "pinpoint" aerial bomb that led to the opening try – but admitted that he was taken aback by the messages of support received before the game.

"I got some very special messages, an incredible message from Ronan O’Gara. It gets you in the right frame for the game," he said.

Despite dealing with a number of injury setbacks throughout the campaign, Ireland showed resilience and a strength-in-depth that has been missing in previous years. 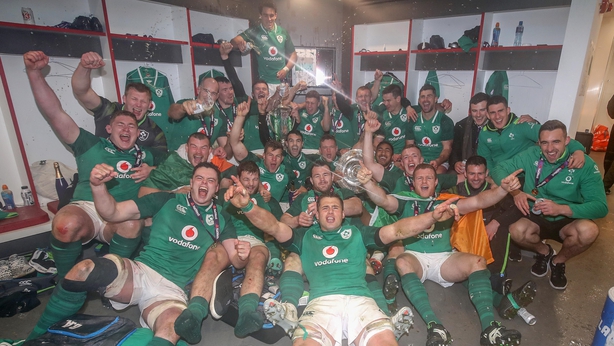 The likes of Andrew Porter, James Ryan, Dan Leavy, Joey Carbery, Garry Ringrose, Chris Farrell, Jacob Stockdale and Jordan Larmour have only enhanced their reputations in the course of the season.

Sexton says the onus is now on the new crop to push standards and maintain the upward curve.

"I think that is the most pleasing thing about the Championship win," he said.

"If you told us before the Championship that we were going to lose guys like Josh van der Flier, Robbie Henshaw, Rhys Ruddock, Sean O’Brien and Jamie Heaslip, you are thinking Ireland are in a bit of trouble, but the young guys stepped up.

"It’s a bright future, but these guys have to keep working hard, try to improve and not let success get in the way of it." 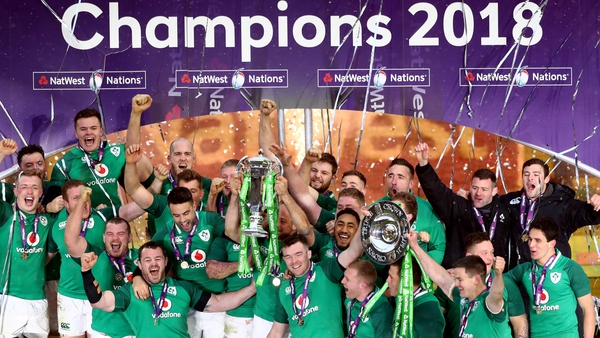