Former Ireland international Donal Lenihan believes that June's Test win in South Africa was a key moment in Ireland's development, and that Joe Schmidt's team are now among the top three sides in the world.

Ireland had a mixed 2016 Six Nations campaign, finishing third behind England and Wales, but have made huge progress against southern hemisphere opposition since then.

A first-ever win in South Africa was achieved despite a large injury list, and the tourists went close to recording a series win.

The 111-year All Blacks hoodoo was spectacularly ended in Chicago, while Saturday’s 27-24 win over the Wallabies meant Ireland had defeated the southern hemisphere ‘Big Three’ for the first time in a calendar year.

The home side overcame injuries to Rob Kearney, Jared Payne, and Andrew Trimble to record a comeback victory at the Aviva Stadium and Lenihan says the manner of the win shows the progress of the side.

“You look at the circumstances Ireland found themselves in for the second half, five of the first-choice backline that started in Chicago were gone. You had players out of position,” he told 2fm’s Game On programme.

“The onslaught they faced in that 22 minute period either side of half-time when Australia came from zero to 24 points... when you add up all of those things and also take into consideration the quality of the backline Australia had, then it was a phenomenal achievement.

“I think even up to 12 months ago you couldn’t see Ireland coming back in those circumstances,” he said, adding that Keith Earls' try was a seminal moment given the circumstances.

Fourteen-man Ireland overcame the dismissal of CJ Stander in Newlands in June, despite being shorn the services of the likes of Johnny Sexton, Seán O'Brien, Peter O'Mahony and Rob Kearney, to record a historic win on South African soil.

It was a performance that had a huge impact within the squad’s belief according to the former Ireland international.

“I think South Africa was a turning point,” he said. “Accepting that the Springboks are nowhere near the powerhouse they used to be, Ireland went down there short a huge amount of players, yet won a Test, should have won two Tests, should have won a series.

“I think we capped nine new players over the Autumn Series. We had a completely new 15 from Chicago to the game against Canada and then back-to-back performances against New Zealand and against Australia.

“When you consider in both those games you lost three key players before half-time. Adding up all of those things, the fact that we beat New Zealand for the first game, and put them under pressure in the second outing, it’s been an incredible few months and augurs well for the future.

“I think there are all kinds of possibilities for this team.”

Ireland closed the gap on third-placed Australia in the IRB world rankings and will take huge confidence into their 2017 Six Nations opener against Scotland.

With home advantage against France and England next year, the RTÉ rugby analyst is expecting Schmidt’s charges to mount a serious challenge for the trophy - with Eddie Jones’ side likely to be the biggest challenger.

“I would say we are in the top three sides in the world. Despite the fact we beat New Zealand, for me they are still number one.

“When you look at England and what they have achieved, 13 wins in a row and 12 of those unbeaten under Eddie Jones. They have won a Test series away in Australia 3-0 which is a phenomenal achievement

“I think we are joint-favourites for the Six Nations. The thing that is in our favour is that the game is in Dublin.

“I would without question say we are in the top three in the world with a huge scope for improvement and a number of players to come back into the side.” 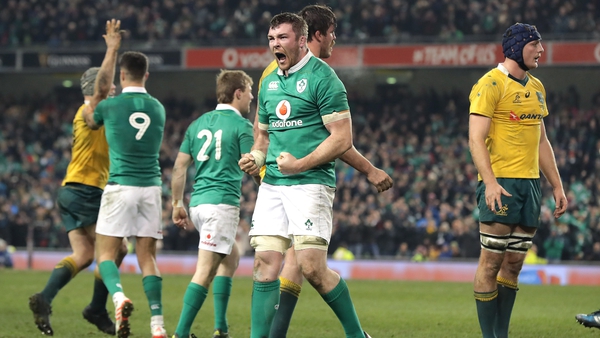