Ireland's class of 2016 stamped their names into the history books as Joe Schmidt's side dispatched New Zealand 40-29 in Chicago for their first win over the All Blacks in 111 years of trying.

Three days after the Chicago Cubs ended a 108-year drought to land baseball's World Series, Ireland lit up Soldier Field with their maiden win over the All Blacks at the 29th attempt.

Jordi Murphy, CJ Stander, Conor Murray, Simon Zebo also crossed for Ireland, who had led 30-8 on 46 minutes before New Zealand fired back into the contest.

The All Blacks were unable to extend their record-breaking 18-match winning streak, paying the price for an error-strewn first half.

Some five million people flocked to the Cubs' victory parade on Friday, and now the thousands of Irish fans in town were fully able to join the party.

Prop Joe Moody eventually was sent to the sin-bin for dangerously upending Henshaw at a ruck. 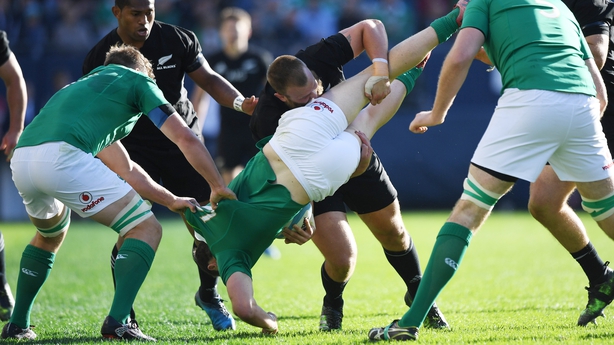 Ireland punted the penalty to the corner, and drove flanker Murphy home.

Sexton's peerless line punt to the corner set up another five-metre lineout.

Rob Kearney soared above Ben Smith to the restart after the penalty, and from that platform Ireland bagged further points.

Ireland then lost try-scorer Murphy to a suspected serious knee injury, the Leinster star carted off on a stretcher after twisting his boot into the turf.

Ireland had entirely bossed possession and territory in a hugely-impressive opening half-hour, and Murray scampered through for the third try. 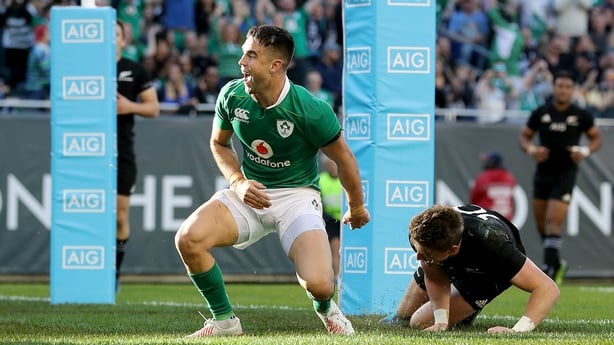 The Ireland nine had pilfered a bouncing ball after Sexton's bomb, then sold Aaron Smith a cute dummy around the fringes, to romp over the whitewash.

Sexton's conversion put Ireland 25-8 to the good. They held that lead until the break.

Moody was lucky to escape with just a penalty for a high shot on Kearney after the restart, especially given his first-half yellow card.

Ireland punished the error once more, though, with Zebo flying into the left corner after another fine driven lineout.

And it was Perenara who raced in for New Zealand's second score, a try owing everything to hooker Dane Coles' superlative offload. Scott Barrett's conversion cut Ireland's lead to 30-15.

No sooner had New Zealand shifted Ben Smith to the right wing, though, than he dotted down acrobatically in the corner.

Beauden Barrett slotted the touchline conversion, with Ireland's lead down to 30-22.

Owen Franks' obstruction gifted Ireland a kickable penalty from the restart, though, but, with Sexton receiving treatment for cramp, up stepped scrum-half Murray to the tee.

The Munster star slotted the three points with ease, edging Ireland's lead to 33-22.

Sexton was then forced out through potential injury, leaving 20-year-old rookie Joey Carbery to make one of the highest-pressure debuts.

Ireland still led 33-29 with 15 minutes to play, but the omens amid the All Blacks' recovery only continued to grow.

Try-scorer Moala slumped off with 10 minutes to play with a serious-looking shoulder problem, leaving New Zealand forced into a total re-jig.

Hooker Codie Taylor, as the last replacement available, slotted in at blindside, with flanker Ardie Savea moving out to the wing.

Zebo cut loose and then punted deep, Ireland forcing Julian Savea to touch down for a five-metre scrum.

From the scrum Henshaw powered home for Ireland's fifth try, converted by Carbery. That left Ireland leading 40-29 with three minutes to play.

Carbery missed a late penalty shot, but, in a week already dripping with sporting history, Ireland still hung on to add their own twang to the tale.