Joey Carbery has declared himself finally fully fit and ready to repay Ireland's faith for taking him to the World Cup when carrying an ankle injury.

The Munster out-half revealed that training fully and without impediment on Tuesday was a "huge confidence boost" ahead of Saturday's Pool A decider against Samoa in Fukuoka.

Carbery almost missed the World Cup with the ankle ligament injury he suffered in August's 29-10 victory over Italy in Dublin, but was backed by boss Joe Schmidt to shake off that blow while out in Japan.

The 23-year-old came off the bench in the 19-12 loss to the host nation but then aggravated his ankle issue and was a late withdrawal from the bonus-point win over Russia.

But now the former Leinster playmaker insists he is ready to strike back to top form, admitting it is time to pay back Ireland's coaches for bringing him to the World Cup in the first place.

"Hopefully, I'm 100% now, it has been quite a frustrating year with injuries," said Carbery.

"But I'm fully back now and feel back to myself as I was.

"So that's a huge confidence boost for me and I suppose I can just get back out there and do what I've been doing.

"I suppose with the timing of the injury just before we left for Japan, and the nature of it as well, it was always going to be a bit of a frustration.

"But to be honest I was lucky enough to even be considered and that I did enough to get on the plane.

"The coaches showed a lot of faith in me and I'm very grateful for it.

"I want to repay that faith now. I want to go out and do the job and show them that they weren't wrong; that's definitely in the back of my mind." 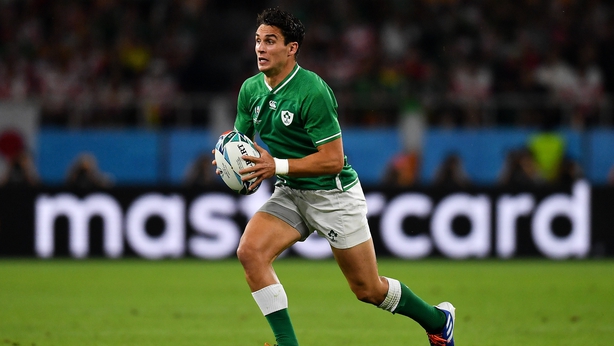 Regular fly-half Carbery was due to cover scrum-half from the bench for the Russia clash, but pulled out late on due to a minor recurrence of that ankle concern.

Ireland subdued the Russians 35-0 in Kobe to set up a group decider against Samoa, where another victory will secure their qualification for the quarter-finals.

Carbery explained his latest ankle niggle was never anything serious, but enough of a problem to prove an unwanted distraction.

"I had a little bit of a setback last week, which was frustrating," said Carbery.

"But I'm feeling really good this week, it was nothing major last week, so I'm in a good spot.

"The ankle just took a bang, nothing more than that."