Ireland scored five tries in a bonus-point win over Russia to go back top of Pool A but the victory was far from convincing.

Joe Schmidt's side will now qualify for a quarter-final should they claim five match points against Samoa in nine days’ time but serious questions remain about the form of the team, who still looked shook from Saturday’s defeat to Japan.

Whether the knock-out game will be against New Zealand or South Africa depends on how Japan fare against Samoa and Scotland.

Following the Shizuoka shock Ireland will have wanted to produce a ruthless performance, but couldn’t find any rhythm despite playing against 14 men for 20 minutes of the match.

There was further concern with Jordi Murphy, who arrived to the country on Sunday as a replacement for Jack Conan, lasting just 27 minutes before departing with a rib injury, while Johnny Sexton, who was captaining the side for the first time, was replaced at half-time by Jack Carty.

Tries from Rob Kearney, Peter O’Mahony, Rhys Ruddock, Andrew Conway and Garry Ringrose meant the result was never in doubt but it was a case of stumbling into the next match in Fukuoka as opposed to banishing the demons of the loss to Japan.

Handling conditions inside the closed-roof Kobe Misaki Stadium was difficult but again could not account for the error count (23 turnovers) against the team ranked 20th in the world, who only qualified after Belgium, Spain and Romania were sanctioned for fielding ineligible players.

"If they continued to play to that level I don't think they'll progress past a quarter-final," said Jamie Heaslip on RTÉ Sport's TV coverage, 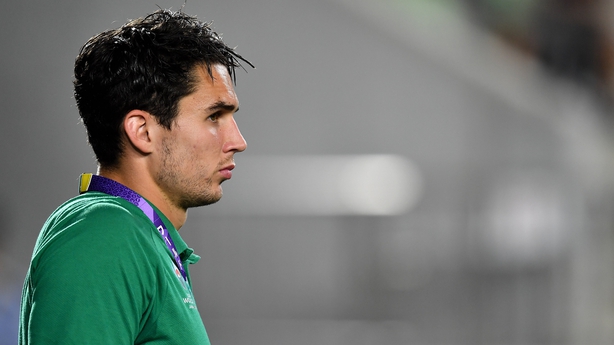 Ireland had to deal with a small disruption ahead of kick-off when Joey Carbery (above), who was due to provide scrum-half cover off the bench, was replaced by Conor Murray, with "some irritation in the ankle" cited by the IRFU as the reason.

The Athy native had injured his ankle in the warm-up game against Italy in August but did feature for 20 minutes in the loss to Japan. In the end Murray was not needed with Luke McGrath lasting the distance.

It will provide more of a complication for upcoming games than it did today given that Robbie Henshaw, who has missed all three games with a hamstring injury, and Chris Farrell (concussion) were also unavailable.

Schmidt had made 11 changes to the team beaten by Japan with Ringrose starting his third game, while Sexton returned having missed the Japan clash.

Ireland dominated territory (73%) and possession (67%) in an opening half that yielded three converted tries but also contained a number of unforced errors.

Kearney got his fourth try in five games when he broke from halfway with just two minutes on the clock. 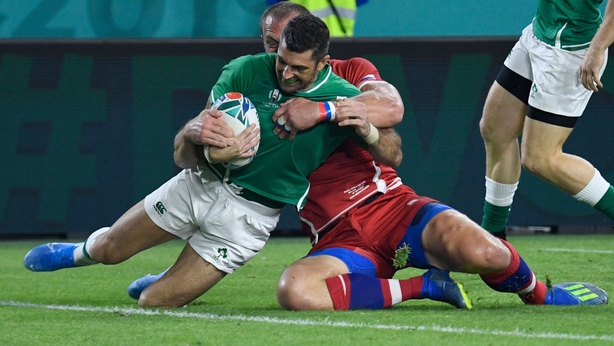 And the lead was doubled 11 minutes later when O'Mahony, the only forward to keep his place in the line-up, was first to Sexton’s grubber kick close to the posts.

It was the flanker’s second international try and the first since 2013 against Samoa, incidentally the first try scored in Schmidt’s tenure.

Still Ireland were not comfortable and had nine turnovers and three penalties against their name in the first half, while two high balls into the 22 from out-half Ramil Gaisin caused problems for the back three that Russia could not convert into scores.

But the Bears were racking up penalties of their own and one of the eight conceded in the first half led to a yellow card for lock Bogdan Fedotko in the 33rd minute, which was soon followed by man of the match Ruddock powering over with John Ryan in support for Ireland's third.

The opening 20 minutes of the second half were hard to watch as Russia grew into the game and forced more handling errors and won a penalty off a scrum.

"We actually did some really good things in that 20 minutes," said Schmidt.

"It's just we couldn’t get anything on the back of it."

Andrey Ostrikov was lucky not to be sent off in the 51st minute when his high clear out on Ryan was deemed just a yellow card. 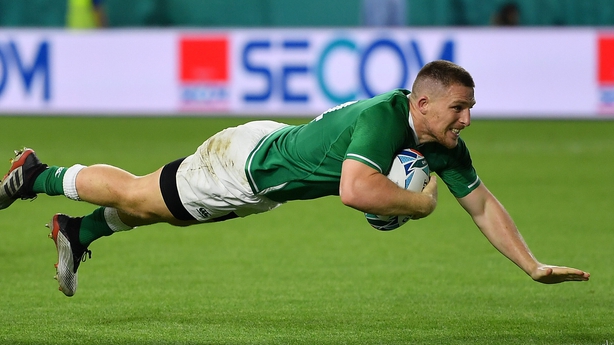 The bonus point was secured in the 62nd minute after good work by Carty and Keith Earls set Conway free for a run-in from the halfway line, while Ringrose added the fifth late on following a break from Jordan Larmour.

The result will do little to assuage doubts about Ireland's ability to trouble the All Blacks or the Springboks in a potential quarter-final and it will feel like a long run up to the final pool game against Samoa on 12 October.

"I never plan for anything too much," Schmidt told RTÉ Sport when asked about a potential quarter-final.

"You've got to do some logistical planning making sure that you know where you are going but there are two very open scenarios for us and we don’t control which scenario happens,

"It’s up to Japan now and they will be very hard to knock off although Scotland are starting to build and that’ll be a huge match at the end of the pool but we don’t control that."

"We’ve got to make sure that we get a result against Samoa." 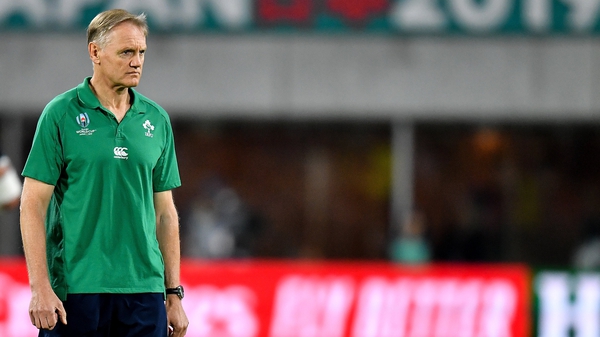