Joe Schmidt cut a relieved figure as he declared himself "delighted" with Ireland's bonus-point win over Russia.

The result means that a similar return against Samoa in nine days’ time guarantees a quarter-final place with the possibility of topping the pool should results go their way in the remaining games.

"In the context of the quality of tries I’m delighted, yeah, you always want more but a 35-point margin is pretty good," he told RTÉ Sport after the 35-0 success.

"We were here for the captain’s runs yesterday; we’d heard the horror stories from [the media] about how tough it was going to be in the stadium.

"I spoke to Gregor [Townsend, Scotland coach] about the stadium and he said it’s very tough going.

"They were in a little bit of the same situation they had a couple of penalty tries in the second half of their game.

"I thought we created lots. The first try, we scythe through and we had three or four support players.

"The second one Johnny [Sexton] saw the space and put the ball through nicely for Pete to pick up and score.

"Then there was a bit of a gap unfortunately before Rhys managed to muscle his way over but the biggest gap was waiting for that fourth try and that was a bit nerve-racking.

"You get into that final quarter and you’ve made a number of line breaks and you think that it’s almost going to happen and it doesn’t but when Keith Earls got a bit of space and linked up with Andrew Conway  he streaked away and that was a massive relief.

"Our best try was probably the last one, Jordan Larmour lighting up and linking up with Keith Earls and back to Garry Ringrose."

Despite the five-try haul the win would do little for overall confidence levels. The third quarter in particular saw a number of handling errors that Schmidt was left to rue. 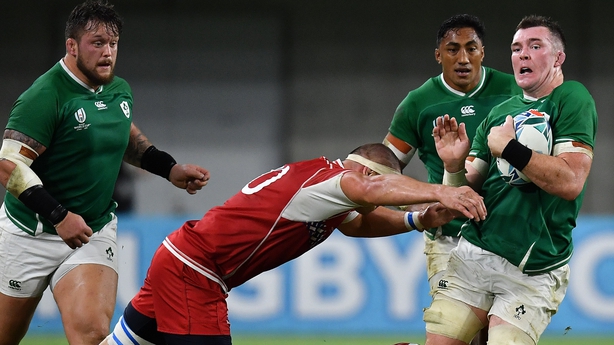 "We actually did some really good things in that 20 minutes," he added.

"It’s just we couldn’t get anything on the back of it. There was a great lineout maul that we made a good number of metres off it but then when we played off it we got a little bit untidy and as soon as you got untidy and got hit with the ball, the ball was like a bar of soap.

"We knew there was 65 handling errors in the two games. I was hoping we wouldn’t quite reach that level but I’m pretty sure between us and the Russians we got about 40 as well.

"I never plan for anything too much. You’ve got to do some logistical planning [for a possible quarter-final in Tokyo on 19/20 October] making sure that you know where you are going. 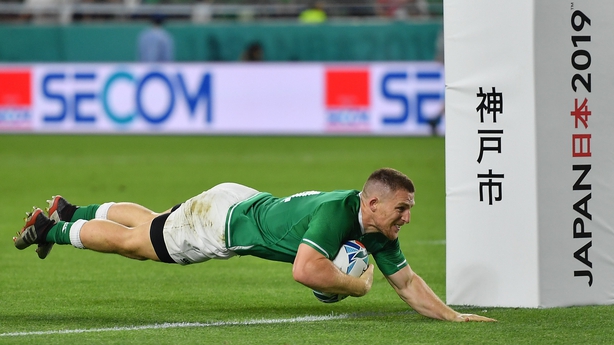 "Iit’s up to Japan now and they will be very hard to knock off although Scotland are starting to build and that’ll be a huge match at the end of the pool but we don’t control that.

"We’ve got to make sure that we get a result against Samoa."

Schmidt also confirmed that the decision to take Sexton off at half-time was tactical and that Jordi Murphy (rib) and Joey Carbery (ankle) will be assessed.