Ireland's Katie-George Dunlevy and Eve McCrystal have won gold at the Fuji International Speedway in Tokyo.

The Irish duo won the B time trial in a time of 47 minutes 32.07 seconds to claim their second medal of Tokyo 2020 and retain the title they won in Rio five years ago.

They finished well clear of Britain's Lora Fachie and Corrine Hall, who were second in a time of 48:32.06.

Dunlevy and McCrystal added the gold to the silver they won in the B 3,000m individual pursuit on Saturday and could yet claim a hat-trick of medals in the road race.

"We went for it," pilot McCrystal told RTÉ Sport. "I think after he first lap we were five seconds ahead so I think we're better ahead than chasing. I just had in my head, 'I'm not letting this go now'. we just went for it and I think we're after having the ride of our lives. I can't believe it."

Dunlevy said she expected a good performance beforehand. "I could feel it before we went. I was like, 'we're going to win this'. We really wanted it.

"It was really technical. Eve did a great job of steering."

"We're after doing the ride of our lives" - Ireland's Katie-George Dunlevy and Eve McCrystal reflect on their brilliant gold #rtesport #paralympics pic.twitter.com/ZNHwUUYkef

Dunlevy, who is blind, was raised in Crawley, England, but competes for Ireland as her father John hails from Mountcharles in Donegal.

She added: "It means the world to me, working for five years towards this. We wanted to come here and retain the title but really wanted to get the best out of ourselves and have a good ride and hope that would give us a medal and then a gold medal.

"Just for kids or adults at home with a visual impairment that our success today shows that you can do anything you want to do. There is nothing you can't do. This might inspire them and I know it gives pride to the people at home and just up lift people after two of the pandemic." 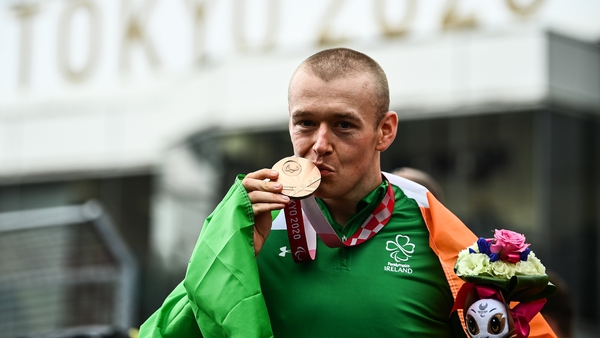