And then there were two. Or maybe make that three where the Irish are concerned.

On Sunday, at 3.40am Irish time, Brisbane Lions and Melbourne Football Club will vie for glory in the Australian Football League Women's Grand Final and such is the plethora of talent from these shores plying their trade Down Under, an Irish player is guaranteed to be on the winning side.

It's old hat to Orla O'Dwyer of course. The Tipperary footballer has been building up her experience since joining Brisbane as a rookie signing ahead of the 2020 AFLW season.

She hasn't looked back in that time, as she got her hands on a Grand Final winner's medal the following year, becoming the second Irish player to end up as a champion after the Lions came out on top against Adelaide Crows.

And she has been recognised for her individual excellence, this April she was included in the AFLW All-Australian team - their equivalent of the All-Stars - taking one of the three centre positions, the first Irish woman to be named in that prestigious seasonal selection.

She goes into Sunday off the back of a campaign in which Brisbane finished top of the league standings on 36 points, level with their final opponents Melbourne.

O'Dwyer has contributed an average of 12.7 disposals per game, marginally above her career average, suggesting incremental improvement at the heart of the Brisbane midfield in her fourth season.

However, Melbourne's Blaithin Mackin and Sinéad Goldrick will be aiming to stop the Lions from roaring and join the list of Irish Grand Final winners for last season's grand finalists.

Both were involved in the preliminary final win over a North Melbourne side featuring Meath's two-time All-Ireland winner Vikki Wall and Cork's Erika O'Shea.

Dublin's Goldrick and Armagh footballer Mackin racked up 11 and 10 disposals respectively on the day to help carry the Demons through to the decider.

Goldrick has plenty of All-Ireland winning experience to draw on having been part of three of the Dubs' triumphs in 2017, 2018 and 2019 before she and inter-county team-mate Niamh McEvoy signed for Melbourne in time for the 2020 season.

The 32-year-old defender has averaged 9.7 disposals per game. Mackin, meanwhile, has enjoyed a solid debut year in the AFLW, having moved Down Under whilst her sister Aimee stayed put, and is averaging nine disposals herself this season, as well as plundering a goal during a match against West Coast Eagles.

While the destination of the trophy is unclear, what is more crystal is that O'Dwyer, Goldrick and Mackin will be at the heart of the teams' prospects at the Springfield Central Stadium near Brisbane. 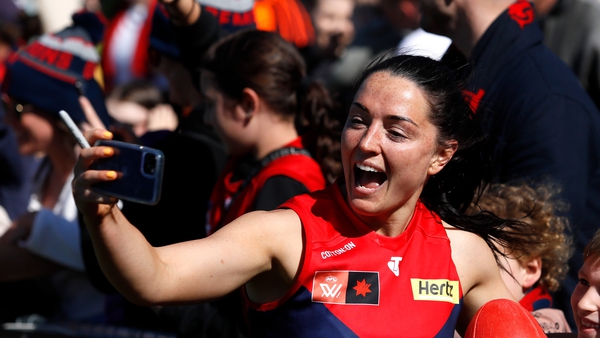