The coronavirus outbreak continues to have an impact on the sporting schedule as some of 2020's biggest events come into view.

Global cases are estimated to have hit 85,000 as the geographical footprint of the virus widens, while the death toll is approaching 3,000.

A range of sports have had to take action to prevent the spread of the virus, with postponements hitting the Guinness Six Nations, Formula One and Serie A among others.

With spectacles such as Euro 2020, the Olympics and golf's majors on the horizon, we take a sport-by-sport look at the impact of coronavirus.

Gianni Infantino, the president of the sport's world governing body FIFA, said on Friday: "If games have to be postponed or played without spectators until it is over, then we have to go through that."

Games during the March international break could come under scrutiny, including the Republic of Ireland's Euro 2020 play-off in Slovakia on 26 March.

Four top-flight matches in Italy, which is also set to host four matches at Euro 2020, were postponed last weekend, while a further five have been called off this weekend, having initially been slated to be played behind closed doors. Games in the top two divisions of Swiss football this weekend have been postponed, as have matches in Japan and South Korea.

"In what is a very cluttered season, because of the World Cup, finding a date is going to be very difficult" - Donal Lenihan on the sporting implications of #IREvITA being postpomed #SixNations pic.twitter.com/IccGHDcbjg

Ireland's Six Nations match against Italy in Dublin on 7 March has been postponed and tournament chiefs are attending a pre-scheduled World Rugby summit in Paris on Monday where the remaining five fixtures will be discussed. England's trip to Rome on 14 March is the biggest concern due to the escalating crisis in northern Italy.

International Olympic Committee president Thomas Bach told the Japanese media this week that preparations for this summer's Games in Tokyo were continuing and told athletes to go "full steam ahead" with their training.

Peter Sherrard, the CEO of the Olympic Federation of Ireland, is confident the Tokyo Olympics will proceed as planned but insists neither the OFI or the International Olympic Committee are being complacent about the threat of the coronavirus.

He said his organisation was "fully committed" to the Olympics starting in Tokyo on schedule on 24 July. IOC member Dick Pound had earlier said that a decision on whether the Games could go ahead or not would need to be taken by May, but stressed the event would only be cancelled if it was felt that to do so would pose a serious threat to the health of athletes and spectators.

The opening three races of the new Formula One season in Australia (15 March), Bahrain (22 March) and Vietnam (5 April) are all still scheduled to go ahead as planned.

The Chinese Grand Prix, which had been due to take place in Shanghai on 19 April, was postponed earlier this month. F1 bosses say they are continuing to monitor the situation. 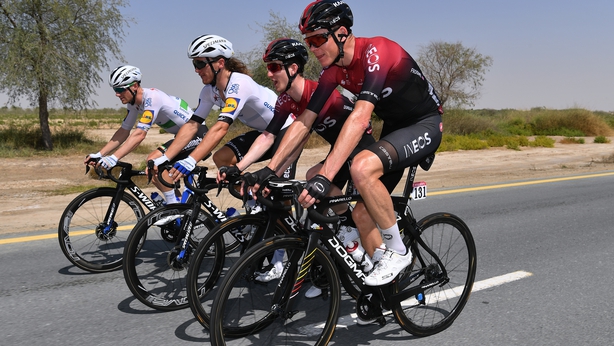 Fears of two cases of the coronavirus at the UAE Tour saw the race cancelled with two stages left and all riders, including Chris Froome and Mark Cavendish, put under lockdown. Dane Michael Morkov had already left the race for the UCI Track Cycling World Championships in Berlin, where he was confined to his hotel room, but he was freed to race on Friday after the two individuals at the heart of the UAE scare tested negative.

Several events in Asia have already been postponed and Italy's Lorenzo Gagli tested negative for the virus before being allowed to compete in this week's Oman Open. With San Francisco told to prepare for a potential outbreak by mayor London Breed on Tuesday, the PGA of America said it was "carefully monitoring the situation" ahead of May's US PGA Championship at Harding Park in the city. Chief executive Martin Slumbers said on Tuesday that the R&A is keeping a "watching brief" in relation to July's Open Championship at Royal St George's.

A number of ATP Challenger Tour events scheduled to take place in China in March and April have been cancelled, while the final of the Challenger in Bergamo, Italy, last week was also called off. "We are liaising with our respective tournaments and local authorities where ATP Tour and ATP Challenger Tour events are played, with the health and safety of staff, players and fans as our top priority," said an ATP spokesperson. The WTA has been contacted for comment on its own approach to the outbreak.

The Irish boxing squad cut short a pre-Olympic qualifier training camp in Italy as a precautionary measure this week, following an outbreak of the virus in the country. Meanwhile, all boxing shows scheduled for March in Japan have been cancelled.

The Badminton World Federation has not yet made any adjustments to its Olympic qualification rules despite the cancellation of some tournaments in which ranking points were available.

The German Open (3-8 March), Polish Open (26-29 March) and Vietnam International Challenge (24-29 March) are the latest tournaments to be postponed or cancelled after the China Masters (25 February - 1 March) was called off earlier in the month.

The BWF has said not enough tournaments have yet been hit for changes to be made because different players could be affected either positively or negatively in the rankings. It will continue to monitor the situation in consultation with health authorities.

The €1.16million China Open, scheduled to start in Beijing at the end of March, has been cancelled.

The World Short Track Speed Skating Championships - scheduled to take place in Seoul next month - have been called off.

The World Triathlon Series event scheduled for 5-7 March, in Abu Dhabi was delayed. Event organisers said they hoped to reschedule the event to take place later in March or April.

Yanqing was set to host a round of the FIS World Cup over 15-16 February, but the event was cancelled by the governing body amid the growing concerns. The World Cup finals, which are scheduled to take place in northern Italy next month, will reportedly be staged without any fans in attendance.