Live coverage of both All-Ireland semi-finals on RTÉ2 and RTÉ Player. Saturday's coverage begins at 4.30pm, while it's a 2.30pm start on Sunday.

Both games will also be live on Sky Sports Arena.

Highlights of all the weekend's action on The Sunday Game, RTÉ2, 9.30pm.

Wet weather is due to clear Dublin on Saturday morning. Dry weather should follow for the whole weekend, with sunny intervals, and highs of 17 degrees.

Westerly winds will be light to moderate.

A detailed forecast can be found on met.ie.

Clare were favourites coming into their All-Ireland quarter-final clash with Wexford and yet, for the best part of an hour, it looked as if the Model County were going to set up an intriguing all-Leinster last four clash.

It was only then though, with their backs against the wall, did we see the Banner begin to hit their marks as they blitzed Darragh Egan's men, hitting 1-06 without reply to turn the tie on its head.

While Waterford were seen at the start of the campaign as the biggest threat to Limerick's three-in-a-row bid, Clare have now taken up that mantle, and if they can perform like they did in the last ten minutes against Wexford they will be hard to stop on Saturday evening.

That said, their semi-final record isn't great with just two wins (2002 and 2013) in this century. In that time they've suffered three defeats and a draw (2018), while they've only beaten the Cats once in championship.

That was the 1997 semi-final, en route to a second All-Ireland in three years, but they have failed to win in five meetings since, including a quarter-final draw in 2004.

Kilkenny's semi-final record under Brian Cody is exceptional, with 16 wins, and a draw, from 21 games. It's worth noting though that half of the defeats that the Cats have suffered at this stage under the man who will turn 68 later this month have come in the last two campaigns, with the team falling to Waterford in 2020 and Cork last year.

They've been Leinster champions for three years on the spin now; the fourth time Cody has achieved the feat with a Kilkenny side.

But the eastern province is now undoubtedly the weaker one, with Wexford's loss to Clare the latest All-Ireland quarter-final turnover to be suffered by one of the traditional challengers to the Cats' hold on the Bob O'Keefe Cup.

Since Kilkenny last lifted the Liam MacCarthy in 2015, just one county competing in the province has gone all the way; Galway in 2017.

Saturday's game will tell us whether the best in Leinster can compete with the best of the rest in Munster.

"It'll be tight but they have too much running ability in Croke Park, with [Shane] Meehan and [Mark] Rogers to make an impact late off the bench."

Brendan Cummins added: "The Clare players can release the ball very quickly just as they get to the tackle. So if Kilkenny swarm defence on Shane O'Donnell, he'll have the ball out of his hands while they're wondering if they got a hit on him.

"By that stage the ball will be in around the back. If you commit two or three bodies to the tackle - which Kilkenny do by instinct, they can't step back from that - the speed of hand and the way Clare can release the ball, with the runners coming off the shoulder, will be enough to break the line and get in for the couple of goals they'll need to get over the line."

Limerick on the brink of more history

Limerick's slow start to the year has, as expected, given way to another near perfect run to the last four. Clare are the team to ask the most questions of John Kiely's men but they've come up with most of the answers.

A weakened Treaty side drew with Clare in Ennis, before winning the Munster final with the help of extra time. Other than that they recorded victories over Cork, Waterford and Tipperary to reach this stage. 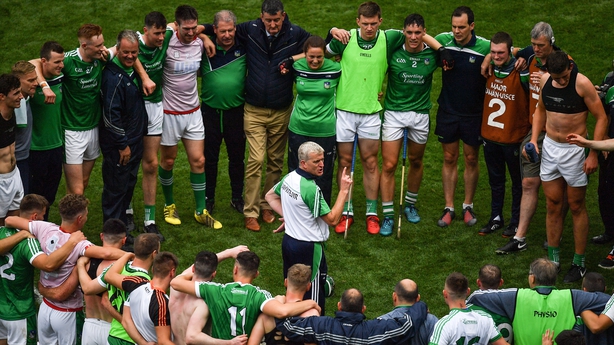 Since lifting the new Mick Mackey Cup, Cian Lynch Peter Casey and Barry Murphy have all returned to training, having missed their championship campaign so far, adding depth to the strongest panel in the country.

This is Limerick's fifth semi-final in a row, and only their surprise loss to Kilkenny, after a slow start, in 2018 is stopping them for going a potential five-in-a-row of Liam MacCarthy triumphs.

Which Galway will show up?

It's hardly an original question to ask of Galway coming into an All-Ireland semi-final, but which version of the Tribesmen will appear at GAA HQ on Sunday afternoon?

They've only lost one game in the summer so far, although it was the Leinster final against Kilkenny. They had earlier beaten the Cats in the round robin, to go with matches they would have expected to win against Laois, Westmeath and Dublin.

They couldn't hold on against Wexford, but it ended up mattering little as the point gained on the first day was ultimately enough to see them into the provincial decider.

In terms of potential injury worries, Gearóid McInerney was being monitored this week having taken a blow to the knee in the quarter-final win over Cork. Brian Concannon started on the bench that day but would be expected to start if fully fit.

Henry Shefflin has made a solid start to his time in charge in the west, taking Galway into the last four for the sixth time in eight seasons. After their 2021 campaign, which saw them lose to Dublin and Waterford, the progress is clear.

Their All-Ireland semi-final record of late is hit and miss, progressing in 2015, 2017 and 2018 (after a replay) but missing out in 2016 and in their most recent last-four appearance two years ago.

Championship meetings between Limerick and Galway have been rare enough, with the Treaty triumphing in the two most recent clashes going the way of the Munster men; 2005 was Galway's last win.

"I think they need to be very well structured," Derek McGrath told this week's RTÉ GAA Podcast when asked about what Galway can do to cause an upset.

"They set up to stop Cork's running game and they succeeded to a point, albeit Cork had goal chances. You'll see a really aggressive Galway approach and it'll be successful enough to not win the match!"

Brendan Cummins added: "There's nothing better than a cause, and being written off as much as they have been.

"Daithí Burke and Gearóid McInerney, if they can get a big spin out of those two down the spine of that defence, and if they're knocking Limerick lads coming out with the ball, and they can keep doing it for 73 or 74 minutes [they have a chance]."

Follow the All-Ireland Hurling Championship semi-finals this weekend, Kilkenny v Clare (5.30pm on Saturday) and Limerick v Galway (3.30pm on Sunday), via our live blog on rte.ie/sport or on the RTÉ News app. Watch live coverage on RTÉ2 and RTÉ Player with live radio commentary on RTÉ Radio 1.

Full-back line pivotal if Galway are to shock Limerick