New Munster GAA chairperson Ger Ryan says he favours the idea of retaining the current order in which the Allianz Leagues and the provincial championships are played going forward.

Ryan was speaking after being elected to his new role over the weekend, and ahead of a potential vote on structural change for the football championship at next month's annual congress.

After over 50% of delegates voted for the so-called 'b proposal' - shy of the 60% required - at last October's special congress, the GAA's president Larry McCarthy created a task force to come up with a number of potential structures which might address the failings of the previous ideas.

They came up with two plans; the red and green proposals.

Red - an updated b proposal?

The former, seen by the association as being 'an improved Proposal B', would see the provincial championships played as a round-robin tournament in February and March. This would be followed by what the association calls a 'national league type championship' based upon the current divisions of the NFL.

Preliminary quarter-finals would give the winners of the lower divisions the chance to reach the last-eight of the All-Ireland championship.

The Tailteann Cup would be straight knock out.

The green proposal would see the league and provincial championships retain their current order in the calendar i.e. NFL to be followed by the four regional competitions.

The provincial tournaments would be played on a knock-out basis, as they currently are, over five weeks. Round robin formats would be used in both the Sam Maguire and Tailteann Cup competitions that would follow.

Provincial finalists would compete in the top competition. If they've spent the preceding spring in one of the lower two divisions of the league, their Sam Maguire round-robin place would come at the expense of county that finishes last in Division 2.

A meeting of the GAA's Central Council on Saturday will decide if either, or both, of the new proposals are to be sent for a vote at next month's annual congress.

Tipperary native Ryan, who served on the task force set up by McCarthy to come up with ideas, has given his backing to this latter proposal.

"The two proposals reflect the desire of Special Congress and the wider association for change and provide a clear choice for counties," Ryan said in his address at the Munster Convention on Saturday.

"I would encourage all counties to give close consideration to both proposals and to bring their views to the Ard Chomhairle meeting on 22 January.

"My personal preference is for the Green proposal, which I believe provides change for the better while preserving what is good in our current structures. I look forward to a new structure being adopted and it would be a great to see consensus emerge around one proposal." 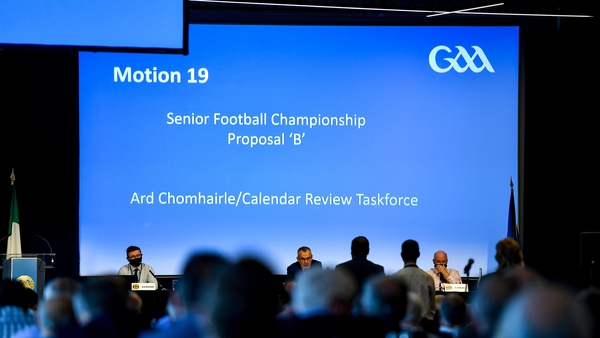