Mayo v Dublin will be live on Spórt TG4 YouTube.

Saturday will be mostly or completely dry, with the best of the sunshine in the east and south. It will be cloudier in the west and north, with a very slight chance of a few spots of drizzle on north and northwest coasts.

It will be warm in most areas, especially in the east and south, with temperatures of 20 to 23 degrees, but cooler in Atlantic coastal areas, with highs of 15 to 18 degrees. Winds mostly light westerly, but moderate south to southwest winds on Atlantic coasts.

Sunday will be very warm and dry in Leinster, Munster and east Ulster with sunny spells and highest temperatures of 22 to 26 degrees and light to moderate southwest breezes. A bit cooler in western counties where it will be cloudier with highs of 16 to 21 degrees. Through the evening, showers will develop across Connacht and Ulster.

Cork have been perennial regulars at the latter stage of Division 1 league campaigns and they find themselves within a step of a 15th final in 17 years, a run that started with a loss to Mayo in the 2004 decider.

But it's a different story for Donegal, who have only featured in one league final in that span. That was back in 2017 when Saturday's aforementioned semi-final opponents defeated them by a narrow one-point margin.

But they come into the semi against Cork in good form having won three from three in their 1A group, beating Mayo, Galway and Westmeath along the way.

Last weekend's victory over last year's All-Ireland semi-finalists and 2019 runners-up Galway by a 4-21 to 2-11 margin away in Tuam was impressive, with Geraldine McLaughlin and Karen Guthrie particularly outstanding.

Cork's only defeat has been to All-Ireland champions Dublin before they faced a tough battle against Waterford last time out. With Donegal in confident and flying form, another closely contested clash can be expected. 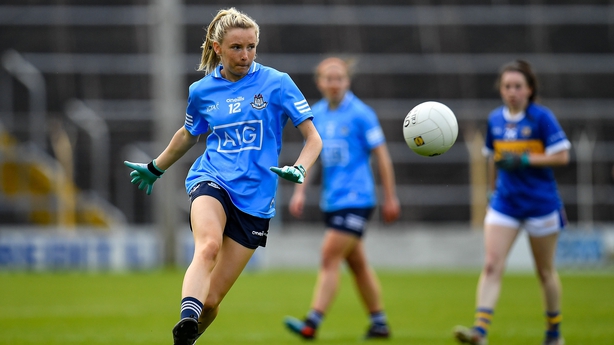 Dublin searching to find balance in the league

While Dublin have become the dominant force at All-Ireland level, it hasn't quite translated to the league. This year, they will be aiming for a five-in-a-row in the championship, but they have only won the league once, in 2018.

Mayo, who they beat in the final that year, stand between Dublin and a third final, qualifying for the last-four courtesy of a 24-point victory over Westmeath.

With the Carnacon contingent in the fold, including Fiona McHale, Mayo will have plenty of encouragement but they are facing a buoyant Dublin who have won three from three after overcoming Cork, Tipperary and Waterford.

Kerry, Monaghan, Cavan and Meath will be aiming for a place in the Division 2 final and the chance to be in contention for promotion to Division 1, while Tipperary and Westmeath are trying to avoid going the other way in the relegation play-off.

Kerry and Cavan both have 100% records from their 2A and 2B campaigns which will give them confidence when they face Monaghan and Meath in their respective semi-finals.

Louise Ni Mhuircheartaigh has been in particularly good form for the Kingdom and will be one to watch for the Monaghan defence, given that she plundered 4-06 last time out against Wexford.