Meath booked a Division 2 semi-final date with Cavan following a comprehensive 4-18 to 0-05 win over Clare in Navan.

The Royal county started in fine fashion and had nine points on the board by the time Clare got off the mark through Roisín Considine in the 17th minute.

Meath led 0-13 to 0-02 at the break and the one-way traffic continued in the second half with Stacey Grimes (2), Emma White and Bridgetta Lynch finding the net.

The Breffni county are in the promotion hunt courtesy of a hard-fought win over Ulster rivals Armagh. A late Aimee Mackin goal gave Armagh hope, but Gerry Moane's side held on for a 2-12 to 1-14 win.

It will be Kerry against Monaghan in the other Division 2 semi-final, while Wexford and Tyrone will contest the relegation play-off.

Louise Ni Mhuircheartaigh scored a first-half hat-trick for Kerry, who were 6-14 to 2-7 winners over Wexford at Fitzgerald Stadium while Monaghan stormed to a 5-15 to 1-11 win against Tyrone.

The Division 3 semi-final pairings will see Sligo play Kildare and Laois up against Roscommon, with Fermanagh and Wicklow set to lock horns in the relegation play-off.

In the all Connacht tie, Sligo edged past Roscommon by 0-13 to 0-11, while Down condemned Fermanagh to the relegation play-off following their 1-17 to 2-12 win.

Kildare left it late to tie up their 0-10 to 0-9 win over Longford, while Wicklow’s 2-9 to 1-11 win over Laois wasn’t enough to avoid the relegation play-off.

And in Division 4, it’ll be Leitrim against Limerick and Offaly against Louth in the semi-finals. Today there were wins for Louth over Derry, Leitrim score five goals in victory against Antrim, while Limerick edged into second place in Division 4B with their 2-6 to 0-8 win over Carlow. 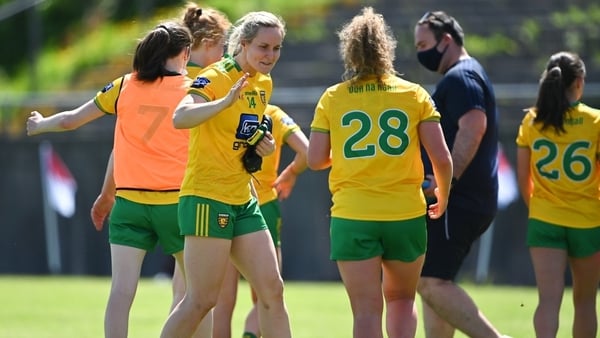 Donegal advance to league semi-final with victory in Tuam