By Jackie Cahill at Parnell Park

Cork made it nine League titles in ten seasons with a nervy one-point victory over Donegal at Parnell Park.

In a fixture that was level six times, Ephie Fitzgerald’s team had the nous and know-how to deny the first-time Division 1 finalists.

Donegal would finish the game with 13 players when Yvonne McMonagle was sin-binned in the 59th minute, before Katy Herron was shown a red card for a high challenge on Jess O’Shea.

Ultimately, the attacking class of All-Star Finn proved the difference, as she scored 1-4 in the first half before adding six second half points.

Donegal’s lethal inside pairing of McMonagle and Geraldine McLaughlin had blazed a trail to the final, registering 12-36 between them in their previous four games, but they were held scoreless in the second half.

In the first half, McLaughlin scored 1-4 and McMonagle 0-3 but they drew a blank after the break as Cork pulled down the shutters.

With ten minutes of normal time remaining, the sides were level at 2-13 apiece before two Finn frees put daylight between the sides. 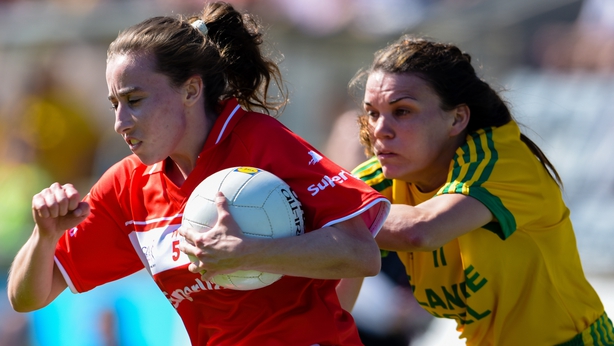 Karen Guthrie reduced the deficit to just a point again but Cork held out as Donegal lost two players in the closing minutes.

Considering that Cork were without travelling captain Ciara O’Sullivan and Player of the Year Brid Stack, ruled out through injury, this was a notable victory for them.

It’s been a campaign of transition for Cork, who lost Deirdre O’Reilly to retirement while doubts surround the futures of Briege Corkery and Rena Buckley, and yet silverware was still secured.

Donegal beat Cork in Mallow during the group stages and their odds tumbled in the days approaching the game.

At half-time, they were very much in the hunt, trailing by 1-9 to 2-8 but caught by two sucker-punch Cork goals.

Within 19 seconds, Cork had the ball in the net as Finn profited from the throw-in with a smashing finish.

And yet Donegal, who lost Kate Keeney to an early injury, rallied to level at 1-1 to 0-4 by the tenth minute, with McLaughlin looking particularly dangerous.

McLaughlin fired home an unstoppable goal in the 16th minute to level matters again at 1-5 each and when Guthrie converted a free ten minutes before half-time, Donegal were ahead for the first time in the game.

Smelling danger, Cork responded with an Eimear Scally levelling point before the Éire Óg star netted in the 23rd minute, rewarding the approach work of Shauna Kelly, Bríd O’Sullivan and captain for the day, Doireann O’Sullivan.

Donegal remained competitive approaching the break and an impressive opening to the second half saw Micheál Naughton’s charges back in front.

Niamh Hegarty goaled in the 37th minute, knifing through the Cork cover after taking a pass from Herron.

Two points clear, 2-10 to 2-8, Donegal had a platform but Cork have been in worse situations before and were quickly level.

Both sides traded blows down the home straight, with Donegal missing several good chances while their fans expressed annoyance with referee Colm McManus, but Cork had the wherewithal to get the job done and retain the silverware.