Séanie Johnston told RTÉ's Game On that he thinks Donegal have a 'real chance' of winning All-Ireland this year after beating Tyrone on Sunday.

Declan Bonner's side finished strongly to see off the Red Hands by two points in Ballybofey, and set up an Ulster SFC semi-final clash with Armagh on Saturday week.

It leaves them two wins away from a third provincial crown on the spin, but Johnston thinks a winter All-Ireland championships will suit the Tír Chonaill men.

"The way the championship has ended up this year - in the time of year it's going to be played - Donegal are going to be a real, real force," he said.

"I thought Tyrone could beat them, but I thought that if Donegal got over that test they'd have a real good chance of winning the All-Ireland.

"They've so much physicality around the middle of the field. They can win their own kickouts, and the pressure they then put on Tyrone's kickouts yesterday.

"The introduction of Oisín Gallen made a massive difference. Tyrone's main man-marker is without doubt Ronan McNamee and he usually nullifies whoever he goes on.

"The impact of having another really big threat in the full-forward line was a big addition for Donegal.

"I think Donegal are in a wonderful place, and they're massive favourites to win the Ulster Championship. If they don't do it they'll definitely see it as a missed opportunity."

On the other side of the draw in the northern province, Cavan upset Monaghan to set up a quarter-final with Antrim on Saturday.

Looking at his native county, Johnston said it was an "unbelievable win" over the Division 1 side after suffering Allianz League Division 2 relegation the previous week.

"I know from knowing the manager (Mickey Graham) pretty well that he would have been eyeing up this championship game, more so than the league game," Johnston revealed.

"They put in a really good performance."

On the same programme, former Tyrone midfielder Colm Cavanagh said it was "frustrating" to watch his old team-mates come unstuck.

Cavanagh played in the league before lockdown, but announced his inter-county retirement in September.

"I felt that Donegal were a lot more hungry around that middle sector," he pointed out.

"The stats back that up - the breaking balls, Donegal were all over them. They nearly wanted it that wee bit more.

"The goal that Donegal got early in the game, it ultimately got them back into the game. Brilliant kickout obviously, but from a defensive point of view Tyrone would be very upset that that goal went in.

"I was watching it with a keen eye from that defensive side of things... yeah, it was very hard to take.

"Tyrone, for large parts of the game, played some fantastic football. I actually thought they were going to come out on the right end."

Last night on RTÉ's The Sunday Game, Pat Spillane suggested that it might be time for Mickey Harte to step aside after 18 years with Tyrone.

Cavanagh echoed the views of his brother Seán that a change could be needed, despite Harte's record.

"I personally would like to see something fresh in, just from a point of view of let's see if it (winning another All-Ireland) could happen.

"Let's give these lads a run at something different." 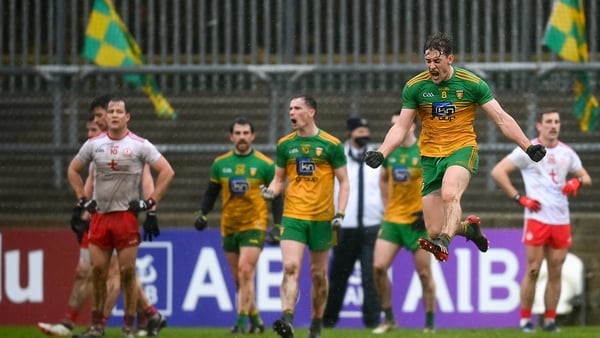 Six talking points from the return of the football championship