The Tyrone footballers, who were knocked out of the championship today, need to hear a "new voice", according to Pat Spillane, who believes it's time for Mickey Harte to step down.

Manager Mickey Harte has been in charge of the Red Hand for 18 seasons and has won three All-Ireland and six Ulster titles.

But the last Sam Maguire success came in 2008 and, despite an All-Ireland final appearance in 2018, they have not been competitive at the top table in recent years.

Donegal beat Tyrone today by two points and with no backdoor in this year's championship, their season is now over.

"In my time in Gaelic football there have been four top-class managers, the four greatest managers of all time," Spillane told RTÉ’s The Sunday Game. "Mick O’Dwyer, Jim Gavin, Kevin Heffernan and Mickey Harte.

"His record is unbelievable.

"He’s been a brilliant servant, owes nothing to Tyrone football but Tyrone is in need of a new face, a new voice, a new management team. That’s what they need." 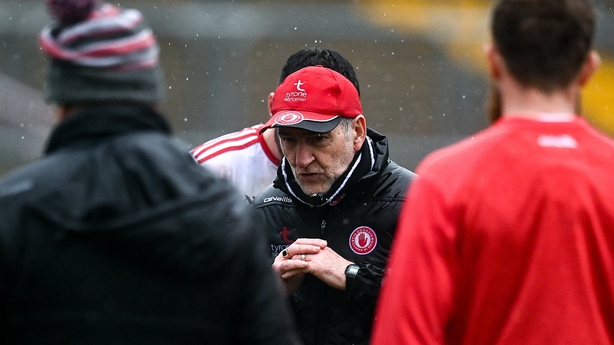 Seán Cavanagh won three All-Ireland titles as a player under Harte and believes that the current crop are good enough to be in the mix at the business end of the season.

"We can’t get away from the fact that it’s been 12 years since we’ve beaten a Mayo, a Dublin or a Kerry in championship football," Cavanagh, who retired in 2017, said.

"I take my blame for a lot of that but I think Tyrone has to find a way now to compete at the very top because I think we’ve the talent to do it.

"You would hope Mickey would be able to have that conversation with the county board to decide when the time is right [to step away] but it’s probably never the right time."