Donegal cleared a huge hurdle towards retaining their provincial title with a 1-13 to 1-11 Ulster SFC quarter-final victory over Tyrone in Ballybofey.

In a gripping, dogged tie played in atrocious conditions, Declan Bonner's side slugged it out to the finish line with the help of seven Ciaran Thompson points.

It’s the end of the road for the Red Hands, but Donegal remain on course for a third successive provincial title, and they have already been installed as favourites to retain their crown

Darren McCurry flashed over a couple of early scores as Tyrone discovered ways to deal with the difficult conditions and a Donegal defence that was slow to get its match-ups just right.

Mattie Donnelly, who nullified the influence of Michael Murphy throughout the opening quarter, got forward to shoot a point, and the Red Hands packed their defence to resist the response, forcing their opponents int a rash of wides.

Ciaran Thompson got Donegal off the mark with an 11th minute free, but they struggled to break down a defence in which Liam Rafferty, Michael O'Neill and Ronan McNamee were solid.

Conor McKenna’s free and a Niall Morgan ’45 saw Tyrone to the water break with a 0-5 to 0-1 advantage, but Declan Bonner got some key detail sorted as he gathered his players around him.

The defensive formation was more compact and effective as they closed down the support runner and plugged gaps that had been evident earlier.

From there to the interval, Donegal out-scored the visitors by 1-4 to 0-1.

With Murphy’s influence rising appreciably and Ryan McHugh breaking lines with regularity, they were a more potent force.

Yes, Tyrone’s defence continued to excel, but the possession Donegal were now enjoying was mounting.

And in the 26th minute, Peadar Mogan collected Shaun Patton’s booming kick-out to send Michael Langan in to smash home a brilliant goal for a significant turning point. 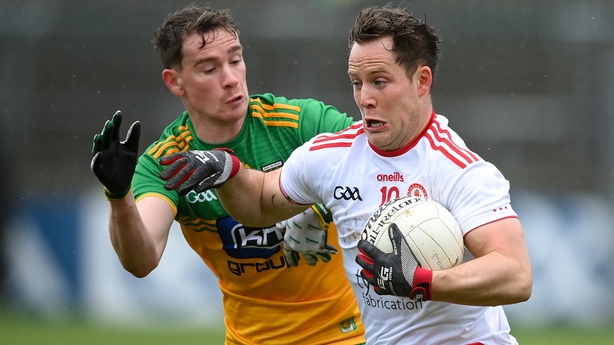 Jamie Brennan and Paul Brennan fired over points for a two-point advantage, and McCurry’s third score was all Tyrone could manage in the 20 minutes to half-time.

With Neil McGee keeping former Aussie Rules star McKenna in harness, Donegal had the sort of control they needed, going into the break with a 1-5 to 0-6 lead.

Six minutes into the second half, Darragh Canavan punished Eoghan Bán Gallagher's hesitancy to pick the corner-back’s pocket and round 'keeper Patton to roll the ball to an empty net.

Now the impetus was back with the Red Hands, but they failed to harness the energy, and Donegal rallied to nail the next four scores, including two from Thompson, who eased them into a two points lead.

Mark Bradley came off the bench to shoot a couple of Tyrone scores, and Patton almost paid the price for fumbling a harmless Richie Donnelly effort, but Stephen McMenamin cleared off the line to spare his goalkeeper’s blushes.

Peter Harte’s score had them level on 1-11 each heading into the final 10 minutes, but it was Donegal who held the edge in terms of grit and determination, with late scores from Thompson and Oisin Gallen securing a semi-final spot.