Earlier this week, we considered some of the reasons for the trend towards high-scoring games in hurling.

Strength and fitness of players, the increasing size of hurleys and tactical shifts have all been cited as factors, while the absence of crowds could also help to explain last weekend's particularly big totals.

One topic we touched on only briefly is that of the sliotar itself.

A common complaint is that modern balls travel too far. As long ago as 2010, former Tipperary player and manager Babs Keating complained that "It spends most of its time in the air, flying over lads' heads. You hardly get any midfield play anymore and now puck-outs are dropping in behind half-back and half-forward lines. It's making a mockery of the game".

Current players do not necessarily agree.

Cork sharpshooter Patrick Horgan suggested last year that "the aul fellas" were "only jealous" and added: "There are fellas swinging the hurley a lot faster than before. If you had the same sliotar that they used however many years ago, we’d strike it further than them now."

Horgan, admittedly from a forward’s perspective, also questioned why anyone would want fewer scores in a game.

As we reminded you this week, the only thing 'new' about the yellow ball introduced for the 2020 championship is its colour, which is intended to make it more visible in front of floodlights, cloudy skies and goalposts.

Otherwise, sliotars should be the same as last year, that is to say they are made by a number of different manufacturers and (since 2007) must conform to the following regulations to receive the official GAA stamp of approval: 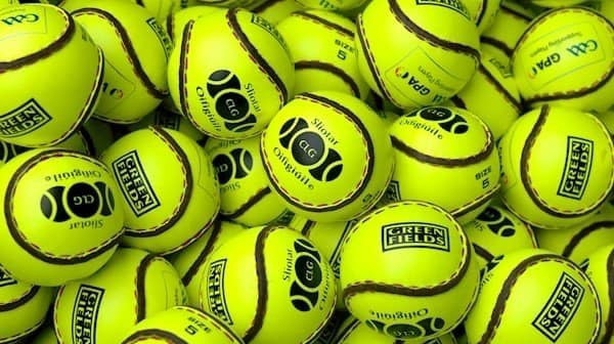 Allowing for a minimum of variation due to individual production, these specifications, calculated by a DCU testing team and based around averages of 15 manufacturers, were put in place to try and ensure a consistency in how sliotars perform.

However, subsequent changes in the core and covering of the ball (traditionally cork and chrome leather respectively) have also impacted things like water resistance and the co-efficient of restitution - bounce factor to you or me - affecting the distance the ball can consistently travel.

"The first significant change commenced around the turn of the century with the transition from the traditional cork and thread core to a polyurethane one," Pat Daly, the GAA's Director of Organisational Culture, Planning & Development, tells RTÉ Sport.

"This also triggered the production of sliotars from outside of Ireland, where it had been something of a cottage industry up to then.

"In 2015/16 the use of synthetic leather - known as G14 - took root abroad and this has had a significant impact on the basic nature of the sliotar, from an aerodynamic perspective  and the distance that it is travelling.

"The big changes seem to be in rib height, rib width and the co-efficient of restitution. The striking force has also changed because guys are using smaller hurleys with a bigger bas and they're probably stronger."

Concerns that many of the sliotars coming from outside Ireland were not meeting the specifications set and bearing counterfeit stamps  - not to mention suspicions they were being produced with child labour - have led the GAA to pursue a digital sliotar for games, which will only be produced by approved manufacturers.

The so-called ‘smart sliotar’ contains a numbered chip that allows it be scanned by match-officials before a game to verify it conforms to standards. It was intended to be introduced this year before the Covid-19 pandemic disrupted discussions around supply chains.

"Players will go for something that will travel further and feel better, but it mightn't necessarily be in the interests of the game," says Daly.

"The more you deviate from that specification the less the sliotar will do what it's supposed to do in terms of having a contest and a spectacle.

"When the digital sliotar is introduced - this will have to be approved by Central Council - it will mean that the day of the 'bag of balls' is over as all match sliotars will then be supplied by the committee in charge.

"This is the CCC - where senior inter-county games are concerned - and I feel that there is considerable merit in having a sliotar bin behind each set of goalposts where these are located."

"At the end of the day you want to see a ball in dispute, a good contest"

The main motivation for the digital sliotar is to ensure that the only balls used are those compliant with the specifications.

Whether those specifications need to change is something that is very difficult to ascertain, given the number of variables involved, and Daly expects significant further research and debate would be needed before any decision to make the ball travel a shorter distance, for example, could be made.

"The specifications should be such that the ball wouldn't be travelling three quarters of the field or it's possible for goalkeepers to score, but that's where it is.

"People would claim the same thing has happened in golf, and the ball has been a contributory factor, but you just can't pin everything on the ball.

"It's possible to slow the ball down but you're going to have a lot of kickback from players.

"How you would even go about getting consensus on that I'm not sure but at the end of the day you want to see a ball in dispute, a good contest. Otherwise it becomes a bit like tennis where you see guys serving aces but no rallies.

"The real beauty of the game lies in the contest and the skill to outwit opponents in play."

The debate over the ball will doubtless roll on even after a verified standard sliotar is the only one used in elite hurling.

In the meantime, a return to what Derek McGrath calls the traditional "blood and thunder championship approach" and weather warnings of various colours could soothe the purists with lower scores this weekend.