Waterford manager Liam Cahill was proud of his players' performances in defeat to Tipperary, but felt that Kevin Moran's sending off was a harsh call.

The Déise suffered their first defeat of their Allianz League campaign, but are still into at least a quarter-final after Galway beat Cork.

They were reduced to 13 men inside the first-half, with Moran receiving a straight red for an off-the-ball incident, after Austin Gleeson had been booked twice.

"I thought it was harmless enough, to be honest. I suppose the officials are there to apply the rules, and if there was a striking action involved well then you pay the price, and the consequences.

"But then I thought it was a bit harsh.

"Austin Gleeson's incident was a second yellow offence out near the line, and it was a yellow card offence, so we've no real issue with that."

Despite the set-backs Waterford battled and Stephen Bennett's goal just after half-time got them right back into the tie.

From there though they hit some frustrating wides, ending the day with 10 more missed opportunities than the Premier County.

"It was a great effort," Cahill added. "I'm thrilled with the way they applied themselves today.

"It was tough being down to 13 men so early, but credit to the players the way they stuck to the task, and worked their socks off throughout the 70 minutes.

"I know we left a number of chances behind us as well, but you have to have that commitment number one. Once you have that, other things might happen for you." 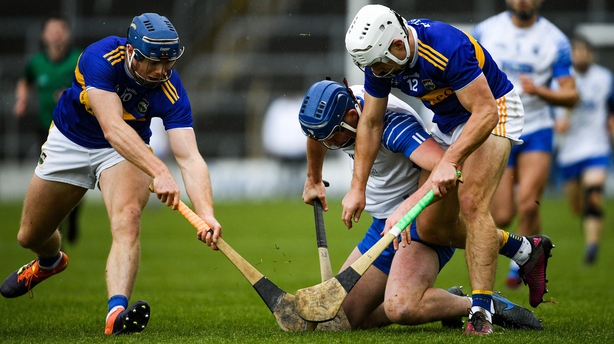 Victory against defending champions Limerick next weekend would see them straight into the semi-finals.

Should they fail to do so, then it'll be a derby game with Wexford or Kilkenny for a chance to get into the last four.

Cahill is in his first season in charge at Walsh Park and he says it's been a positive experience so far.

"I'm getting a great response from players, and everybody associated with the set-up down there, from the top brass to the players," he said.

"There's no silverware won in the month of March, but the way they're applying themselves and the respect they're showing both myself and my management team is really positive.

"What more can you ask of players, only that."