Depending on results this weekend, the previously postponed Division 1 Group A fixture between Galway and Tipperary could be reduced to the status of a dead rubber.

Round 5 of the Allianz Hurling League fixtures comes down the tracks this Sunday, pitting Galway against Cork in Salthill, while Tipperary host Waterford in Semple Stadium.

Limerick, joint-top of the Group A table alongside Waterford with three wins from three, play bottom-placed Westmeath in the Gaelic Grounds in the weekend's other Group A fixture.

For four of the six teams involved, Round 5 will not provide their fifth run-out of the league campaign, the Round 3 clashes of Limerick-Waterford and Galway-Tipperary on 16 February having fallen victim to Storm Dennis.

These games have yet to be rescheduled and the odd doubt has been raised about whether one of them will need to proceed at all.

Should Cork win in Salthill and Tipperary fail to win at home to Waterford, then the three qualifiers for the knockout stages will have been determined.

Both Galway and Tipperary will be eliminated from contention.

As both sides have already beaten Westmeath, the question of relegation doesn't arise, the midlanders having already been condemned to the relegation playoff.

Limerick's postponed game against Waterford will still hold some relevance to the final table, whatever the outcome this weekend, as Liam Cahill's side could dislodge the reigning league champions from the top of the standings and progress automatically to the semi-finals.

Two years ago, three Division 4 fixtures in the Allianz Football League, which had been originally postponed due to the 'Beast from the East', were subsequently cancelled altogether by the CCCC as their outcome had no affect on the promotion battle.

Laois-Antrim, Waterford-Leitrim and Wicklow-Limerick went unplayed with Leitrim awarding London a walkover in another match.

Then Waterford manager Tom McGlinchey expressed deep annoyance about this at the time, stressing that he had suggested an alternative whereby the game could be fixed for Abbotstown but the GAA weren't interested.

With the calendar as densely packed as it is, the GAA might be tempted to suggest that the Galway-Tipperary game should go unplayed but this appears unlikely given the high-profile nature of the teams involved.

Galway, in particular, would surely be unwilling to forgo the possible gate receipts from a home game against the All-Ireland champions.

Other Group A scenarios

The prospect won't arise should both Galway and Tipperary triumph at the weekend.

That outcome would see Cork eliminated from the competition with Galway and Tipp facing into a head-to-head battle in Salthill to reach the knockout stages.

But they would require Tipp to beat Shane Ryan's side in the re-scheduled fixture and even then the Rebels' score difference is not healthy.

The most likely scenario should all teams finish on four points is that Tipperary will progress on score difference, with Galway and Cork being eliminated.

If Tipp beat Waterford and Cork gain a victory in Salthill, then the one certainty is that Galway will be eliminated.

Were Liam Sheedy's team to win on Salthill on the final day, combined with a Waterford loss in Limerick, then we would have a three-way-tie on six points.

Tipperary would surely progress on score difference in that scenario, and while Cork's score difference is currently weaker than Waterford's, this scenario pre-supposes a Cork triumph in Salthill and two Waterford defeats in tough away venues.

It's highly possible then that Waterford - who have won all three of their games - could be the unlucky team in such a three-way-tie.

It remains possible that Tipperary could beat both Waterford and Galway and still land in the dreaded fourth position.

If Cork beat the westerners and Waterford pull off an upset in the Gaelic Grounds, then Tipp's efforts will be in vain.

The All-Ireland champions will find themselves tied for third with Cork on six points, missing out on the head-to-head thanks to their 2-24 to 1-25 loss in Páirc Ui Chaoimh at the beginning of February.

The picture is rather more straightforward in Division 1 Group B, where the original schedule has held firm despite bracing weather conditions.

Assuming there's no more disruption, Group B will wrap up this Sunday.

Barring a couple of highly unusual results, the identity of the three qualifiers looks settled, if not the order in which they're placed. 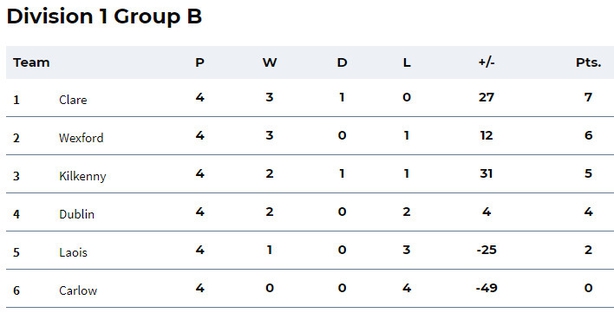 Brian Lohan's Clare sit top of the table and have already qualified for the knockout phase but they will need a win at home to Dublin on Sunday to make sure of top spot and an automatic route to the semi-final.

Even if the Dubs do upset the group leaders in Ennis, it's still unlikely this will be enough to propel them into the knockout phase.

Wexford and Kilkenny both sit in front of them in the table, on six points and five points respectively.

Brian Cody's side head to O'Moore Park on Sunday to play Laois, with a victory - and likely even a draw - being enough to place them in the knockout stages.

Laois' crucial one-point win over Carlow last weekend secured their survival in Division 1 for another year.

Carlow are destined to face off against Westmeath in a relegation playoff in the battle to retain top tier status for 2021.