The Breffni County will face reigning provincial champions Donegal on 23 June after beating Armagh by six points in their semi-final replay at Clones today.

"The players did the business and this is their victory," Graham told the BBC.

"The game took a lot of twists and turns during the course of it, but our lads showed great composure and nerve for the second week running.

"Armagh had a couple of patches when they came back at us, but we took the right options at the right times thankfully."

Cavan have won twice as many Ulster titles as their nearest challengers Monaghan (37-16) but their last Anglo-Celt Cup came against Derry in 1997 and they have only been in the final on one occasion since, the 2001 loss to Tyrone. Graham featured in both games as a player.

"I'm a wee bit shocked just now. It's been such a long time for a county like Cavan with such a strong tradition in the Ulster Championship to reach the final," said the manager, who is in his maiden campaign in charge.

"It's a special day, not just for the players but for everyone associated with Cavan." 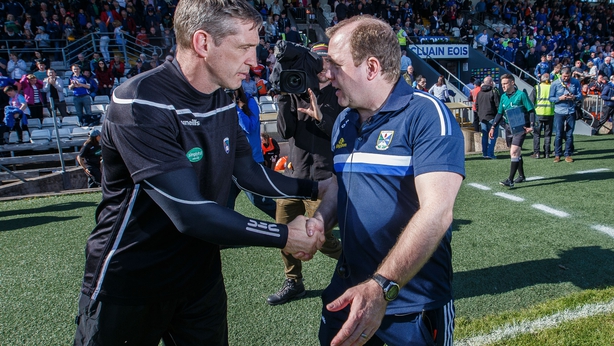 Armagh manager Kieran McGeeney was left to rue his side's failure to take some excellent opportunities to raise green flags as they head into tomorrow's qualifier draw.

"We had a lot of goal chances and didn't put away any of them. We had three one on ones with the keeper," he said. "When you're getting through, you need to make the most of it.

"In the end when we were trying to stretch forward, they got a couple of extra points.

"I'm proud of the fellas. They really put in a great effort and it just wasn't to be on the day.

"We're back in the qualifiers now and we'll see if we can give it a go."