Cavan qualified for their first Ulster SFC final in 18 years with a 0-23 to 0-17 win over Armagh in an absorbing replay at Clones.

Two sides intent on making a much-needed breakthrough went at this contest with all the fervour and positivity they could muster, and a crowd of 21,192 was treated to a full-blooded shoot-out.

Forty quality scores were racked up as the image of negative Ulster football was well and truly erased at this famous Monaghan venue.

In the end, Cavan’s staying power and strength off the bench saw them through to a meeting with holders Donegal as they survived an Orchard storm, pulling away to win by a flattering six points margin.

They couldn’t be separated a week ago, when they finished level at the same venue, but this time the Breffni men possessed the willpower and the stamina to see it through to the end.

Armagh, with Jamie Clarke back to his brilliant best, will approach the Qualifiers with confidence, and could be around for a significant stretch of the summer ahead.

Armagh had two golden goal chances inside the opening five minutes. First Aidan Nugent got in behind his marker, but his shot from close range was deflected away by ‘keeper Raymond Galligan.

An even better chance fell to Jamie Clarke, who tried to pick his spot in the bottom corner, but, one on one with Galligan, side-footed past the wrong side of a post.

They were soon made to rue those misses as the Breffni men survived to counter with pace, picking off scores through Dara McVeety and Niall Murray (2) to go 0-03 to 0-01 ahead by the eighth minute.

Mickey Graham’s side varied the approach between running and long kicking towards full forward Gearoid McKiernan, wrong-footing their opponents to go four clear.

Moments after denying Andrew Murnin with a superb block, Conor Moynagh got forward to shoot a fine score, with McKiernan adding another. 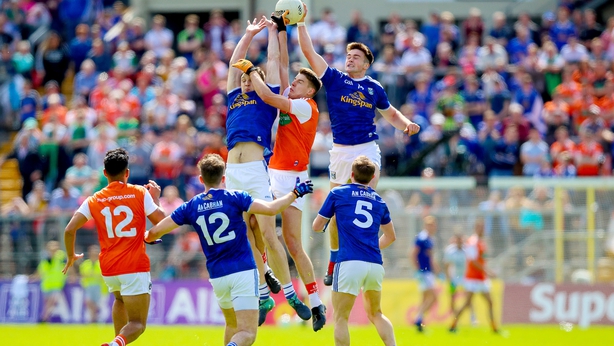 The Orchard struggled to rediscover their early dash and verve, and the predictability of their offensive efforts played into the hands of the Breffni men.

Murray added another from a free, and Killian Clarke made it 0-07 to 0-02, but Armagh created another goal chance, Galligan again coming to the rescue with a point blank save from Mark Shields.

And the Breffni ‘keeper added value to his contribution as he converted a long range free.

The Armagh attack was living off scraps, but O’Neill stroked over a long range point, and Clarke slotted over a couple of gems as they clawed their way back.

A seven points deficit was trimmed back to three as Clarke converted a free for his fourth, Cavan ahead by 0-11 to 0-08 at the break.

Murray smashed a shot off a post early in the second half as Cavan went back on the attack, setting the tone for another helter-skelter half of richly entertaining football, each side in turn finding their own spells of inspiration.

Oisin Kiernan had the Breffni men in front by five, but another Orchard flourish saw substitute Stefan Campbell narrow the gap to one, with Clarke and O’Neill adding to their personal tallies as well.

But with Killian Clarke driving from deep, McVeety still full of running and energy and Cian Mackey off the bench to add his guile and experience, Cavan had more in them.

Moynagh, Mackey, McVeety and McKiernan all steered over inspiring scores as they pulled clear and finally broke Orchard resistance.